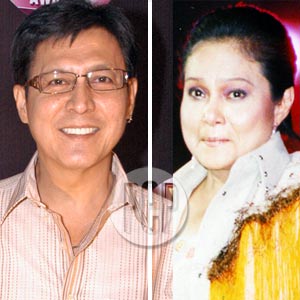 The Guy and Pip love team is one of local showbiz's most memorable love teams. The popularity of their tandem—including their doll Maria Leonor Theresa—seemed made in heaven but, as fate had it, they never had a relationship. To this day, our kababayans still flock to their reunion shows.

In the history of Philippine Cinema, the love team has always been crucial in intensifying the star power of a particular movie. Film producers know that a "kilig" love team determines box-office results to a great extent. No wonder they invest a great deal of money on hyping up the sparks and the chemistry between reel partners.

To keep apace with the romantic trend, talent managers and publicists launch love teams as one of their oldest tricks of the trade. The on-screen partnership of Gloria Romero and Luis Gonzalez in the 1950s lasted for almost three decades with over 30 movies. Even when both found their real-life partners, their countless fans continued supporting their movies.

1. Nora and Tirso (Guy and Pip). One of local showbiz's most popular love teams of all time started in the box-office hit The Musical Teenage Idol in 1969. Their tandem was unusual, say older fans, because for the first time, a morena (Nora) was paired with a mestizo (Tirso). And the unusual became phenomenal! Even Maria Leonora Theresa, the doll given by Pip to Guy, was a sensation.

2. Sharon Cuneta and Gabby Concepcion. Before they became a real-life couple (but eventually parted ways), Sharon and Gabby were first paired as a love team in the movie Dear Heart. From then on, they teamed up for numerous teenybopper movies, which made them the most popular love team during the '80s.

3. Maricel Soriano and William Martinez. Maria was paired with William Martinez in the early '80s. Their love team was described as wacky. Taray, which used to be the nickname of the Diamond Star, was a cool antithesis to Pabling, as William's closest friends called him fondly.

4. Nida Blanca and Nestor de Villa. Nida and Nestor were both movie and dance partners. Unlike most love teams, they ventured into romantic comedy. Although Nida played wife to Dolphy in the TV series and film John en Marsha, the Pinoy audiences remembered her more with Nestor de Villa. After the early '60s, they took some time off from movies but reunited in the '80s.

5. Vilma Santos and Edgar Mortiz. The love team of Vilma and Edgar started in a TV show entitled The Sensation, says an article by Tito Mads, "Santos Manages to Stay On Top." The pair became a twosome, on and off the small screen. Although producers attempted to pair Bobot, the popular name of Edgar, with Nora Aunor, the public still clamored for Vi and Bobot.

6. Romnick Sarmienta and Sheryl Cruz. Romnick and Sheryl were a hot love team during the '80s. Their reel tandem, which first started in That's Entertainment, turned into a real relationship. This delighted their fans but, unfortunately, problems in their personal lives got entangled with their professional careers. Their love team came to a halt when they broke up. Sheryl went to the US where she met her husband, while Romnick stayed here and married his childhood sweetheart Harlene Bautista.

7. Piolo Pascual and Judy Ann Santos. Judy Ann first teamed up with Wowee de Guzman, who became her real-life boyfriend. But it was her tandem with Piolo that generated the loudest shrieks among fans. The chemistry between Piolo and Judy Ann first showed up in the defunct soap opera Esperanza. ABS-CBN and Star Cinema then made it a point to bring them together in TV series and movies. And their followers actually hoped that they'd end up together, but Ryan Agoncillo came into Juday's life.

8. John Lloyd Cruz and Bea Alonzo. John Lloyd was 18 when he was paired with Bea, who was then only 14 years old. Despite the age gap, their mestizo looks brought out the "kilig factor". Most of their fans had hoped that their onscreen romance would eventually become a real thing, but Bea fell in love with with Mico Palaca and John Lloyd, with a non-showbiz girl. Their fans were understanding enough to accept that their idols couldn't be together—the proof, their recently concluded telenovela Maging Sino Ka Man was a success in terms of viewership.

9. Mark Herras and Jennylyn Mercado. Mark and Jennylyn are both products of the talent search StarStruck. In fact, they were both the grand winners of the show. Their offscreen and onscreen romance unfolded right before the public eye. Even their on-and-off relationship became a talk of the town. How did they make it to our list? Even after they called it quits, the clamor for their pairing did not stop. They're currently part of the cast of Tiyanaks, a horror flick produced by Regal Entertainment.

10. Kim Chiu and Gerald Anderson. Kim and Gerald became such a favorite of the viewers that their love team was given the name "Kimerald." Movies, TV series, endorsements—they're always together. They're too young for love, they claim, but ABS-CBN insiders say that their friendship is blossoming into a relationship. This, their fans would surely be delighted to see in real life.