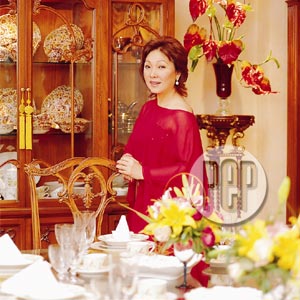 In this stately house, Mel is caregiver to her four children—when they're around: singer-composer Wency Cornejo, lawyer Ana Theresa, Melanie, and U.S. based Jose Miguel. Mel has four grandchildren. (YES! March 2002 issue)

For her now highly successful broadcasting career, Mel Tiangco wants to thank just one person: Mr. Edwin Fargas. When she first auditioned at RPN 9 for the part of newscaster, it was Fargas, then the station's news director, who alone picked up on her potential. Even when his manager Jun Medina clearly did not. Fargas prodded Mel to try again, to go over to PTV 4 which was then looking for an on-cam talent. That same day, Mel marched over to the station. One week later she was reading the news on the air.

When People Power 1 toppled the Marcos regime, the government-owned Channel 4 did not renew Mel's or her co-workers' contracts.

"Everybody hated everyone at the government station," she recalls. "They thought that we were lap dogs of the Marcoses 'no... For Christ's sake, I was getting P2,000 a month! Sasabihin mo ba namang kampon ka ni Imelda n'un? Feeling namin, we were victims of the EDSA Revolution. Parang mga trabahador lang kami d'un. Ni hindi kami kilala ni Imelda 'no."

But Mel admits she was traumatized. She and her co-workers found strength by sticking together. She, being the only one still with a job—she had another one at a radio station—became their "ate-ate." Meaning, she had to look out for the others who were then jobless. "Ikaw, may trabaho ka, kailangan pa-meriendahin mo kami, bigyan mo kami ng pamasahe muna d'yan, we're looking for a job" she explains.

One day one of them said they should all apply in Channel 2. But Mel, still traumatized, demurred: "‘Hindi na. Ayoko ko na, kayo na lang.' Aba, sabi sa akin, ‘Aba, hindi puwede kasi ikaw may kotse ka pa, may pang-gasolina ka pa, kami wala." Being the "ate," she was coerced into driving all of her four "siblings" in her rickety rockety Volkswagen to the Chronicle Building on then unpopulated Meralco Avenue.

All five sat at a long table for the interview. The interviewer asked everyone what everyone did for a living. When Mel's turn came up, she promptly answered: "‘Sir, I'm a newscaster.' Tapos sabi niya, ‘Do you do it in Tagalog?'E, hindi, e, 'di ba?" The Marcos years were an era of English newscasters, reporting in Tagalog was considered passé. "Pero ewan ko ba kung bakit bigla kong sinabi, ‘Yes, sir.'" she laughs. Out of the five, she was the only one who got a job.

That was to be Mel's biggest break in her broadcasting career. For the next 10 years, she would work in Channel 2 as a newscaster for "TV Patrol" and executive director of Lingkod Bayan, a public service effort. Then her relationship with the station soured.

"In the beginning, nobody saw anyone as a threat," she says. "We have team work like I never saw again. We loved each other, I mean, really, really, did this for the program. We did this for the station." At that time, she was the one who would type her teleprompter script, get the edited material, and drive to wherever she needed to go. It was a time when reporters would have their own initiative in getting the news. She recalls: "unheard of 'yung, ‘Ah, hindi ko beat 'yan!' You go anywhere to get a story."

Her voice growing emotional, she says, "I gave them the best years of my life. And this was the time when I was young, idealistic, aggressive, healthy, and strong, taking ‘No' for an answer. Talagang go, go, go ako n'ung panahong 'yon. To the mountains! To the river! To the sea!"

Then success, she says, caught up with the company. "The company grew, and with progress, naging impersonal ang relationships, naging dog-eat-dog, naging survival of the fittest."

Finally, fireworks. ABS-CBN suspended Mel for appearing in a detergent commercial in violation, the station said, of its circulars. Mel insisted that her contract allowed her to accept commercial endorsements. And, reading the suspension as "constructive dismissal"—or being pushed to where it was impossible for her to go on working—she filed a case before the labor arbiter for illegal dismissal and for damages. She won, but as yet only at that level.

The emotional fallout is more cut-and-dried. "I was devastated," Mel laments. "I did not imagine my company to do that to me especially that I served it so well. Sinasabi ko sa kanila, ‘Sige nga, labasan nga n'yo ako kahit na memo for tardiness? Wala kayong malalabas sa akin.' You know how I felt? I felt like [stomping the floor with her left foot], 'di ba 'pag nakakakita ka ng cockroach? I felt like a cockroach."

Mel, together with co-host Jay Sonza, left Channel 2's "Mel & Jay," later to surface as co-hosts of "Partners Mel & Jay" at the rival station, Channel 7. It would later on become "Mel and Joey" with Joey de Leon as her new partner. Mel would also co-anchor "24 Oras," a daily news program, and host her own show, "Magpakailanman," a weekly drama anthology.

GMA 7 has already become, to Mel, a new lease on life.

"I thought my career was dead already," she says pensively. "After ABS, parang ayoko ko na e. Sino pa'ng kukuha sa akin? Sinisiraan nila ako. They were lambasting me in all media—radio, print, and TV. E, you know when you are a journalist, ang kailangan mo the credibility, the integrity. And that is precisely what they wanted to destroy. Akala ko wala na, dedma, ano pa'ng babalikan ko? Sirang-sira na ako. Hindi pala, e. ‘Yun pala, the people were seeing through what was happening there. Yes, it was a second lease on life. And what a life again!"

By TV standards, this is more than a new lease on life; it's positively a resurrection. How to explain it?

Mel says simply, "You can't put a good person down."