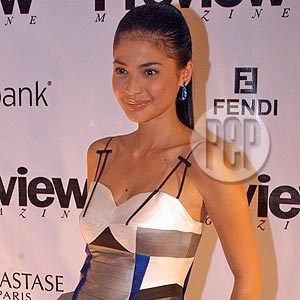 Preview magazine's July cover girl, Anne Curtis, worked the red carpet in her Ivarluski Aseron dress. The MTV VJ is one of this year's 10 Best Dressed. She said, "If you're considered as somebody that's well dressed, not only in my industry, but in [society]—it's really a compliment. I'm so flattered! When I saw myself on the cover, my God ano ba ‘to!"

The Embassy Cuisine crowd saw the future—the Retro Future at least—at Preview magazine's Best Dressed party last Friday, June 29. Manila's fashionistas gathered at the Fort in their most retro futuristic garb to see who made it to this year's prestigious list.

ACTRESS, ANCHOR, REPORTER. Three beautiful women from show business made it to the top-ten list. Incidentally, they're all from one station, ABS-CBN.

"Like the many character roles she plays, her style is one that's always evolving and never dull," described Preview of Anne Curtis.

The actress said she wears what she feels.

"I have different styles for different moods... It's harder being fasyon in showbiz because people always look at what you're wearing. And in this business, some people aren't always open-minded about fashion. Slowly though, people are letting go of being too safe," she explained.

Another Kapamilya on the list is Bandila news anchor Karen Davila.

"She eschews the traditional for an unfailingly modern sensibility that favors cleans lines and bold color," said Preview about Karen.

Though she presents herself as serious and resolute on television, Karen believes her fashion style to be "elegant and functional."

She commented, "It's important to look polished, tailored, and presentable to your audience. But what you have to say is much more important than what you're wearing. I never wear something too ridiculous or ostentatious that it distracts the viewer."

Preview described her fashion: "She glamourizes the evening news with her instinctive style and love for everything vintage."

Marie credits her flair to her mom.

"From the time I started dressing up my Barbie doll, my mom helped me make Barbie's little outfits. I also built my personal style on my prized vintage jewelry collection from my mom. She's been saving heirloom pieces for me and my sister since we were babies. I hope to do the same thing for my daughter," she said.

Want to know who made it to 2007's Best Dressed list? Grab the July issue of Preview!