Sensibility in the midst of controversy 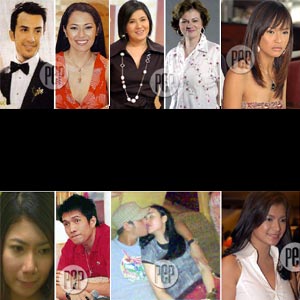 PEP presents its recent top six comments. This time, it's all about keeping your cool in the heat of controversial issues.

As controversy and intrigue surround our artists, do we, the general public, react quickly and get confused in making judgment? Or do we piece together all that we know and share something that might be enlightening and could even help as invaluable advice? Many PEP viewers tend to make knee-jerk reactions, whipping up controversy-related hysteria and often making hasty—or nasty—generalizations on issues that are still unresolved.

PEP had been getting quite a number of these responses since the day that the Gretchen-Dawn feud hit the headlines in November 2006. Fans and plain onlookers found a communication channel for their thoughts, messages, and grievances about an issue or a celebrity.

More often than not, the ones who react too hastiliy are those who have bad things to say. But there are also some who ponder about the report or story. As one PEPster put it, "mas madaling humusga kesa umunawa ngunit mas basehan ng pagiging mabuting tao ang pag-unawa kesa paghusga"

The following comments (verbatim) are personal opinions expressed according to their author's understanding of the story. PEP chooses these messages as examples of a sense of objectivity and responsibility that stimulates other PEPsters to share their own thoughts. A healthy discussion on hot issues surely is beneficial for all—fans and showbiz artists alike.

These comments made the celebrities feel better somehow, even while they were embroiled in controversy.

THE DAMAGE HAS BEEN DONE. Who will believe Kris & James now that they are trying to deny everything? We can't be fooled into thinking that the affair did not happen. We all have brains here...you may think the public will forget, and that you both can easily move on. Behind your back we all wonder why you pursue men who have such complicated pasts. As for the other woman, no girl in her right mind would reveal an affair to the public, risking embarrassment and tarnishing her reputaion and future. She knew she had so much to lose, especially friends who have turned traitors and a former workplace that only cares about cleaning up thir reputation. We must remember Hope is the VICTIM here, and James Yap is such a coward...not wanting to show what a true man he is and own up to his mistakes. At least Kris knows that in the future, whatever affairs James has had in the past, it will be easier for her to file for an annulment. I hope Kris wises up soon...and leaves this guy!

these is something we should be dealing seriously first siguro naman may common sense sila na nde nila yan gagawin in public .. kung totoo nga yan.. espcially with gretch...then kung someone just photoshop that .. kailangan both parties should speak up... because they destroying their credibility ...at may mga tao silang nasasaktan... kung ito ay gawa lang ng kung sino .....para siraan lang sila... nakakatakot yun kasi is not good,... a lot of people is involved here ....im still giving them the benefit of the doubt until proven guilty....we are not here to judge., we are here to post a comment just make it fair ...

Here some focal points that I need the PEPSTER to think.

1. If there is a beggining certainly there is an end. And think that NOT all beautiful things lasts forever. Some good things just do not lasts.

2. Does the GMA network does not have any right to hold auditions for any other actors or actress?

3. Does ANGEL does not have any right to move to any NETWORK just because GMA made her a BIG STAR?

4. As a stage actor myself, I have respect for ANGEL as an ACTRESS. But that does not mean just because she is a BIG STAR that she will not go ANY AUDITION.

Even in Hollywood, BIG STARS and BIG NAMES has to submit a letter of intention followed by a VTR and and has to undergo an audition. So what made people think that ANGEL is an exception?

5. Actors has their own strength and weaknesses in relation to their craft.

6. ONE POSSIBLE TRUTH is that this a just a STAGED PUBLICITY.

Good or Bad is still a publicity.
Showbusiness has enough space for lies and deception. It is part of the game, RULES I may say.

7. I think that the best thing that BOTH parties should do is TALK and SIT down LIVE in SHOWBIZ CENTRAL.

Let MS. WIlMA GALVANTE, MS. BECKY AGUILA and ANGEL be interviewed LIVE.
In that way everything will be cleared.

As to who started this, we certainly DO NOT KNOW.

BOTH PARTIES has their own motive to do so. To create buzz and controversy.

8. Since ANGEL is an ACTRESS and a PUBLIC PROPERTY, her legions of fans and supporters deserves ONLY THE TRUTH. Why cant she be PERFECTLY HONEST with all these. Surely, she herself has a lot of things to clarify and answer to so many questions.

But PEOPLE should think that IF GMA did not GAMBLE on her, then she would not be a big star, then she will NOT have a lot of endorsements that gave her a lot of MONEY.

Regardless she has been given the CHANCE to by GMA, ITS THE MILLION FILIPINOS has made her a BIG STAR.

WE ALL DESERVE THE TRUTH.

10. I believe that GMA has aired their side already. And ANGEL also has said her piece about these. So I see no reason why this has to go on.

TOO MUCH has been said.
Enough is enough.

Let ANGEL do her thing.
Studying is one good thing that she can do and a good example to the youth.