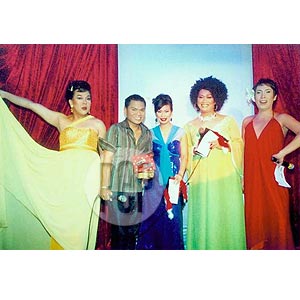 
Friends, guests, and celebrities were treated to a night of Broadway as the hosts-performers at Andrew de Real's The Library on M. Adriatico Street, Malate, reprised scenes from Broadway musicals such as Annie, A Chorus Line, Dreamgirls, Miss Saigon, Cats, La Cage Aux Follies, Beauty and The Beast, and Evita in line of the celebration of the comedy bar's 22nd anniversary last June 21.

That was also the night when another set of Golden Book Awards was given to deserving talents. Three of the highest and most coveted awards—Achiever of the Year, Tinig, and Entertainer of the Year Award—went to Pooh, Andrew Yadao and Billy and Nikki, respectively.

A lot of the comedy bars that sprouted like mushrooms owe most of their talents from The Library, thus making The Library as the mother of all comedy bars.