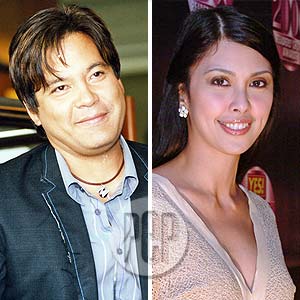 Martin Nievera says: his girlfriend Katrina Ojeda's "monkey" joke about his and Pops's kids was resolved nine years ago. Pops Fernandez says: she learned about it only a few weeks ago. And: "Do I have to repeat what she did? She broke up my family."

Admittedly, yes, according to Martin, but the tag was taken purely out of context, argues the embattled balladeer.

According to Martin, it happened nine years ago after his marriage with Pops had just ended.

"I was living in a one-bedroom apartment after I broke up with Pops. The furniture and interiors were done by Katrina's sister. One day, Robin, who was then eleven, and Ram, then eight, were in my apartment, jumping up and down on my bed and broke it in half. I called Katrina, who was in New York, and made kuwento to her and we laughed about it. She, in turn, called her sister and the people who made the bed and told them the story," relayed Martin lengthily to Philippine STAR columnist Ricky Lo.

Katrina, continued Martin, said these words upon calling her sister and the bed makers: "Martin's kids were jumping like monkeys on his bed and broke it in half."

It was a figure of speech, more a playful, harmless banter, according to Martin. No more. No less.

The "monkey" issue according to Martin had long been settled with Katrina, explaining that she never meant any harm when she uttered the remark.

Again, Martin pointed out, everything happened nine years ago that's why he couldn't understand why Pops is raising the said issue from the grave.

"Nine years ago, Pops understood the story, so I'm surprised why she doesn't understand it now," he said.

Pops reportedly called Martin when he was with Ram in Las Vegas recently and emotionally brought up the matter out of the blue. The phone call, according to Martin, ended bitterly as they were both raising their voices without clearly explaining each other's side.

Martin said that he won't fight with the mother of his children, out of love and respect.

POPS'S SIDE. Pops, on the other, hand confirmed that there was indeed a phone argument that happened between her and the father of her two children just recently.

"When we talked on the phone, I was crying because I was in pain. At the end of the day, even if it was said as a joke or whatever, it doesn't matter. I was saying that she [Katrina] should be careful with her words because she, of all people, if it comes from her, it's very touchy because of what she represents in our lives. Do I have to repeat what she did? She broke up my family," Pops said to Ricky.

Pops mentioned that it doesn't matter whether the incident happened three or nine years ago. The point is that they never cleared anything about the issue since she only learned about the alleged "monkey" remark recently when she went to the United States with Kuh Ledesma for some shows—contradicting Martin's claim that they had already discussed the matter a long time ago.

"I didn't even know that it happened. I only learned about it a few weeks ago when I was in Las Vegas and I heard it from people, who, I understand, were their friends. I kept quiet. Back home, I told my friends about it because I was upset. I want to make it clear: I'm hurting as a mom. Terribly hurting," she lamented.