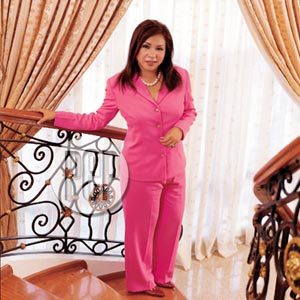 Claire dela Fuente at the stairway leading to the two bedrooms and the receiving room on the second floor. (YES! November 2002)

More than 20 years later, Claire dela Fuente recalls that it was a P.E. classmate who first made the observation after hearing her sing. "I was a student then at the Philippine Cultural High School in Caloocan," Claire says in the same soothing voice that once brought her into Imelda Papin and Eva Eugenio country. "No'ng naging aware na akong mala-Karen nga ang timbre ng boses ko, ginamit ko na."

While still an accounting major at the University of the East, she interpreted "Love Me for What I Am" in a singing contest. She won, not only the first prize but also the attention of one of the judges—well-known composer and musical director George Canseco.

The prolific Canseco had Claire recording the Hope commercial in no time, and the rest, as they say, is history. The jingle is still in use; in fact, its run lasted longer than the singer's own at school. Claire quit shortly before graduation to focus on a suddenly demanding musical career.

"After that, Dyna Records offered me a contract," Claire says today in the luxury of her very grand home. "I did several albums: Claire's Sayang and Claire's Greatest Hits, both of which reached double-platinum status, and Claire—Nangingiti ang Puso Ko got a gold record award. Dyna just recently compiled Claire's Greatest Hits into one CD that got me another platinum award."

Claire mentions all these with pride. After all, they're not a mean feat for someone who also, in her first year of professional singing, married secretly in civil ceremonies.

Claire and Boy de Guzman kept their marriage a secret from jealous fans for years. But they believed their decision to marry then was just right. They had been a couple for two years, Claire's dad had passed away, and her conservative mom had three more kids under her wing. Claire wanted someone who was going to love her and manage her career at the same time. And that's what Engineer Boy de Guzman did—and did well. In 1990, they wed in formal rites at St. Jerome's Parish in Alabang.

In 1993 came King of Kings, a bus company, where she and her husband initially lost money. To pay off debts, Claire sold a portion of the company. "Nagkaroon ng spinoff 'yung business ko, 'yungPhilippine Corinthian. I started from scratch again. Now I'm stuck with it!"

But "stuck with it" hardly seems the phrase to apply to what Claire dela Fuente, the successful businesswoman, does. She actually delights in dividing her time between overseeing the spaces she rents out and the operations of her bus line. She prefers to keep mum about the exact number of airconditioned buses in her fleet, cackling: "Secret, hahaha!"

She sobers up as she relates how business graduates from the University of the Philippines recently tapped her to be their resource speaker. "The invitation really made me feel special, made me feel I belonged," Claire says. "I like talking about it, because it boosted my morale. Hindi nga kasi ako nagtapos. Kaya nga gano'n na lang ang pagpupursigi kong pag-aralin sa magagandang iskwelahan ang mga anak ko."

The college dropout is now president of the Integrated Metro Bus Operators Association (IMBOA), one of the biggest groups of bus operators in the country. The position requires her to attend long public hearings, take calls in the dead of night, and participate in formulating policies to protect the transport sector. "Pinakaproblema ko sa lahatis my load as president of IMBOA. Walang suweldo 'yun," Claire giggles once more. "But it's okay. It's very rewarding."

She cites two proposals she and her group were able to successfully block: a 300 percent toll-fee increase at the South Diversion Skyway and a Department of Trade and Industry memo that wanted buses older than five years out of the road. She says, "I told [Trade Secretary] Mar Roxas that the phase out of five-year-old buses isn't viable right now because we're going through hard times. And there are no second-hand buses that are sold anywhere in the world outside of the manufacturer's own country. Walang available! Ano'ng gagamitin ng maliliit na negosyante sa transport industry? Saan sasakay ang maliliit na tao ?"