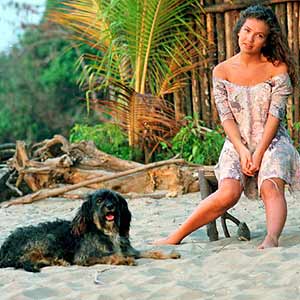 In the 1990s, most of us fell in love with Marimar and its lead star. Thalia was hailed as Pinoy TV's soap opera queen, who graced our TV screens with Maria del Barrio, Maria Mercedes, and Rosalinda. Fast forward to 2007, GMA-7 is set to release a remake of Marimar, which is topbilled by Marian Rivera.

We Filipinos are natural suckers for soaps or drama series shown daily on television. Remember how Anna Lisaand Flordelunainvaded living rooms, and even sari-sari stores, back in the '80s? People automatically got glued to the boob tube once the soap's OBB (opening billboard) starts rolling.

And then, in the mid-nineties came a foreign melodrama that made an impact not just on television; it even found a niche in the collective Pinoy psyche, which, to begin with was long infiltrated by colonial mentality. On the other hand, the Philippines does have close cultural ties with Mexico, having been under Spanish rule for over 300 years and being governed for a time by the Mexican viceroy in behalf of Spain.

1996. Enter: Marimar, a Mexican telenovela aired by the government-owned station RPN 9. Marimar singlehandedly altered the public's viewing habits. Even macho-looking men, who don't normally watch soaps, got hooked. Consequently, the long-running show shook the feathers of the country's then leading station, ABS-CBN, at least in the ratings for the same timeslot.

Showbiz criticsattributed Marimar's success to several of its qualities. First of all, the story was about a poor yet charming young woman who went through a slew of misfortunes brought about by her love for a filthy-rich haciendero. In the end, she discovered that she was the long lost daughter of a wealthy old man. This revelation greatly turned her life around, enabling her to exact revenge on her former tormentors, including her childhood love.

It was the characterization of the heroine as an underdog that really tugged at the viewers' heartstrings. The plot, critics said, was flatly formulaic, but Filipinos naturally have a soft spot for the poor and oppressed. Audiences could easily relate with the sufferings of Marimar as a reflection of the socio-economic plight of the majority. Marimar's triumph in the end signified hope, and the fairy-tale ending satisfied viewers as an escape, at least symbolically, from their bleak plight as individuals and as a people.

Thalia's physical features, as well as the other actors' faces, were as homespun as ours, another factor that contributed to Marimar's success. The actors became household names. Babies born at the height of the show's popularity were named after the characters of the soap; even pet dogs were named after Pulgoso, Marimar's loyal talking canine.

Among the cast, Thalia gained the most attention and adulation of local viewers, of course. As expected, her immense popularity called for her to grace the country with a show, which was highly feasible since she's a singer and a performer in real life.

Executives of RPN eventually confessed that they had gladly relented to give P1 million-plus-per-day for Thalia's expenses during her August 1996 visit. Of course, given the projected income generated by RPN during the show's phenomenal run, they could well afford to shell out the hefty sum.

But, perhaps, the most direct, tangible effect of Marimar on local television was that it opened the doors for other foreign telenovelas to be given considerable exposure here in our country. Noticeably, in the wake of Marimar a number of Mexican telenovelas started sprouting in all the local channels.

Airing the foreign soaps was good business sense. The venture was more cost-efficient: no production costs and talent fees. On the other hand, detractors argued that too many foreign soaps deprived some Pinoys of livelihood and encouraged the public to be engrossed even more with anything foreign; plus, our local talents were hindered from making their own mark in producing soaps.

The Marimar phenomenon, and, subsequently the Mexican telenovela craze, eventually slowed down. This was typical of any mainstream entertainment fad. But it cannot be denied that Marimar made an indelible mark in Philippine television's colorful history.