Amalia Fuentes: "I don't love Joey Stevens anymore. The marriage is over." 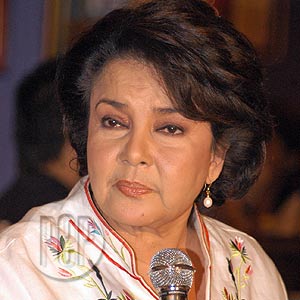 "It can happen to the best of us... because there are always willing women who will tempt your husband, who feel good na naagawan nila ang isang Amalia Fuentes," said the veteran actress about her husband's reported affair with another woman.

"My credibility as a person and as a personality is important to me," began Amalia Fuentes in her press conference held last night, July 17. The Elizabeth Taylor of the Philippines granted an interview with a number of entertainment reporters to clear the air on issues surrounding her marriage to Joey Stevens.

Nena, as most showbiz folks call her, has been in the news lately because of her split-up with her husband. Nena, 66, and Joey, 72, have been married for 28 years.

Joey was said to be having an affair with a certain Angie—reportedly a married woman from a prominent Cebu clan—for the past five years. Nena, who was away for a five-month vacation in South America and the U.S., discovered the affair recently.

"Pagdating ko galing sa States, I arrived June 18, I found out that Joey hasn't been sleeping in the house for five months. Although he has given me many reasons to doubt him—like nawawala na lang siya, hindi nagpapaalam, malalaman ko na lang na nasa Cebu—but still my strong faith in him and my trust, was the one that made me believe him and what he said. Sabi niya nag-golf siya, kung ano-ano ang mga reason niya," Nena narrated.

She continued: "Sinabi niya, ‘I gave up the woman sometime ago. She is now in New York with her husband and this is just a fling.' Sabi ko, ‘Fling? Bakit kailangan umabot sa ganito na malaman ko pa? Why did you disregard my feelings? When you love a person, you will do everything in your power to keep anything that you know would hurt the person.'

"The fact that he was so brave and blatant about this affair, made me believe that maybe he doesn't really care about me. He doesn't give this marriage any importance.

"I have been loyal to him and I have been faithful to him for twenty-eight years. Nobody can come up and claim that I have been disloyal and unfaithful to him, so why should I expect something else from him. Why should I not expect the same thing from him? Talagang I was shocked. I was in pain. I had mental anguish.

There have been reports that Joey fathered a son with the alleged woman.

"According to some people, nagka-anak si Joey na three years old. Hindi ko na sasabihin ang pangalan. Sabi ni Joey sa akin before I came here, ‘Be careful of what you say.' I said, ‘Yong rumor na iyon, you admitted na it was a rumor that has been going on [for some time], so why did you not correct it?' If somebody is being accused of being a father and it is not true, why didn't you correct it? It's up to you to deny or accept it, but as your legal wife, it is my right to know what is true and what is not," Nena revealed.

She added, "He has been evading that issue. As of this moment, I cannot answer whether there is a son out of this illicit affair. It has a legal repercussion. If you don't deny that child, later on when you're dead, he can claim a part of your estate."

She asserted, "Para sa akin kasi it is a very irresponsible act for a seventy- two-year-old man to sire a child, because then he might not able to raise that child. The responsibility of raising that child will be passed on maybe to another partner of the mom. Para sa akin, kung asawa ko si Joey, hindi na ako maga-anak sa kaniya kung seventy na siya!"

Nena was not blessed to have a child with Joey. She has an adopted son, Gerard; and daughter Liezel, with her first husband Romeo Vasquez. Liezel is married to actor Albert Martinez.

It is not surprising that Joey Stevens is trying to win back his wife—hailed as one of YES! magazine's 100 Most Beautiful Stars.

She said, "Whatever he is saying now, that he loves me, gusto niyang sumama kami sa kanya sa China and to the U.S., all these things mean nothing to me now. I have made up my mind that he doesn't love me and that I should go on.

"Di ba ‘yong aso, may kagat ka ng buto pero gusto mo pa rin kumuha ng isa pang buto? In the end, you lose both. Men never want to give up. They don't want subtraction. Ang gusto nila addition! It's up to you if you [want to] take whatever crumbs he gives you."

Nena disclosed that she doesn't have an idea where her husband has been staying since he left the family home. She communicates with him only by text message.

Continue reading below ↓
"We are beyond speaking terms. Nasa hiwalayan stage na kami... I don't love Joey Stevens anymore. I can truthfully say that the marriage is over... I have already consulted a lawyer and we are weighing all options open to a legal wife who has been wronged," she concluded.
Read Next
Read More Stories About
Amalia Fuentes
Post a Comment
Featured
Latest Stories
Trending in Summit Media Network