Jomari Yllana: Pops is more dignified than ever 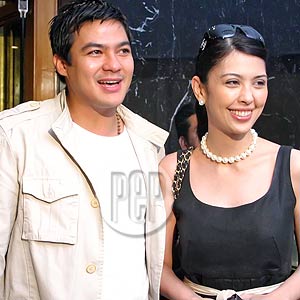 Jomari Yllana arrived with his girlfriend Pops Fernandez at the launch of Be Bench model search—to be aired over ABS-CBN starting July 29—earlier today at Mandarin Oriental, Makati City. The actor is one of the first celebrity endorsers of Bench.

Jomari's ladylove has been in the news lately because of her tiff with ex-husband Martin Nievera. The misunderstanding reportedly started when news reached Pops that Martin's current partner, Katrina Ojeda, called her sons, Ram and Robin, "monkeys."

In an interview with Ricky Lo, Martin explained: "I was living in a one-bedroom apartment after I broke up with Pops. The furniture and interiors were done by Katrina's sister. One day, Robin, who was then eleven, and Ram, then eight, were in my apartment, jumping up and down on my bed and broke it in half. I called Katrina, who was in New York, and made kuwento to her and we laughed about it. She, in turn, called her sister and the people who made the bed and told them the story."

Pops also made her point, "When we talked on the phone, I was crying because I was in pain. At the end of the day, even if it was said as a joke or whatever, it doesn't matter. I was saying that she [Katrina] should be careful with her words because she, of all people, if it comes from her, it's very touchy because of what she represents in our lives. Do I have to repeat what she did? She broke up my family."

Martin and Katrina refused to give further statements about the matter.

Meanwhile, Pops slipped out of the Bench event before the press got a chance to interview her.

Jomari said "No comment" to questions concerning the Pops-Martin feud. Instead, he gave an update on how Pops is coping with the controversy.

"She's okay. She looks lovelier than ever. She is more dignified than ever and I'm so happy for her," said Jomari.

Is he attending his own wedding?

Jomari revealed that he has a good relationship with Pops's boys, Ram and Robin.

"They are such lovely boys. I have nothing to say. They both were brought up to be the good human beings that they are now, very God-fearing. Great job, credit for the mom," he said.

Even though having the Concert Queen as a girlfriend meant less time together because of performances around the world, Jomari said he understood Pops's job.