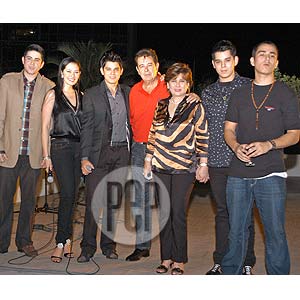 Born to equally good-looking parents, Eddie Gutierrez and Annabelle Rama, the most prominent among their offspring—Ruffa, Richard and Raymond—exemplify all the traits that made their parents highly popular and well loved during their prime.

Show business runs in their blood.

Philippine Entertainment Portal (PEP) presents some young personalities born of celebrity parents, and traces some links or comparisons between the elder folk and their children.

But before we proceed with the list, kindly note that we are limiting it to stars whose parents are still very much part of the local showbiz backdrop. Hence, the popular names of KC Concepcion, daughter of Megastar Sharon Cuneta and former matinee idol Gabby Concepcion, and Ian de Leon, son of Superstar Nora Aunor and Drama King Christopher de Leon, are not included in the ensuing paragraphs.

The Gutierrez's. Born to equally good-looking parents, Eddie Gutierrez and Annabelle Rama, the most prominent among their offspring—Ruffa, Richard and Raymond—exemplify all the traits that made their parents highly popular and well loved during their prime.

Eddie Gutierrez was one of the most sought after matinee idols during the ‘60s. With his sharp mestizo features and towering height, Eddie was every inch a Casanova who thrilled the screaming crowds of female fans. Legend has it that the movie Eddie Long Legs, produced by Sampaguita Pictures in 1964, paid tribute to his slim, sexy legs and breathtaking tallness.

Eddie's wife Annabelle Rama, was one of the sexiest actresses in the early ‘70s. Recently, provocative pictures of Annabelle, which were taken before the declaration of martial law, resurfaced. Today's feisty mother and talent manager finds it amusing that the pictures still generate much attention. Annabelle even boasts that her luscious image was authentic—her body untouched by cosmetic surgery and other manipulations.

Among their children, Ruffa, Richard and Raymond are the ones who have made their own names in show business. In an industry where physical looks will always be of prime importance, the three Gutierrez siblings breezily pass the test.

Ruffa represented the country in the prestigious Miss World pageant in 1993 where she emerged as Second Princess. Following the footsteps of her parents, Ruffa appeared in a number of movies before she halted her career to settle down in 2003 and stay with her husband and children in Istanbul. With the breakdown of her marriage to Turkish tycoon Yilmaz Bektas, the statuesque beauty is resuming her showbiz career with her natural guts and glamor.

On their part, the identical Gutierrez twins—Richard and Raymond—have successfully proven their star appeal by the steady flow of projects that come their way. Interestingly, the boys bear a striking resemblance to their father during his youth, making them certified matinee idols of their generation.

The Eigenmann's. The foreign surname says it all. Ryan, Geoffrey, and AJ Eigenmann—sons of respected actors Michael de Mesa and Gina Alajar—have everything going for them in the world of show business: good-looks, charisma, and talent.

Michael de Mesa, for all his brooding Western matinee idol looks, made sure to avoid the trappings of just being a handsome actor. "I am an artist," Michael would always say during interviews. And he is, based on the guy's impressive credentials. Michael's career, as far as his roles are concerned, is so diverse that you couldn't accuse him of being one-dimensional. Taking the lead with offbeat characters, Michael can well be our answer to Hollywood's Johnny Depp for being adventurous in choosing his roles.

The same goes for Michael's former wife, Gina Alajar. Gina started acting when she was very young and despite getting involved with Michael even before she turned 18, Gina's dedication to her craft never waned, as proven by all the meaty roles she effectively portrayed over the past years.

This early, critics are already taking note of the possibility that their three boys will follow the same route their parents once took and continue to trek. Most notable is Ryan who is already known for portraying character roles reminiscent of his father's frequent involvement with independent films.

Geoffrey and AJ, on the other hand, are more distinguished as matinee idols, given their age and boy-next-door appeal. But that doesn't mean they're bound to be stuck in a pretty-boy groove. Both Geoff and AJ have all the makings of serious actors, as they've shown in some drama episodes they occasionally starred in.

The Sotto's. Despite their having been separated for a long time, most of us have an unexplained fondness for both Vic Sotto and Dina Bonnevie and wish that their union never crumbled.

That's why when their two children, Danica and Oyo Boy, decided to plunge into showbiz the public keenly watched how the two would fare. Given the talent and iconic stature of their parents, many deemed that it would be unfair to expect and put too much pressure on the shoulders of the two young starters in showbiz.

To Danica and Oyo's credit, they never tried to merely imitate their parents, perhaps wanting to create their distinct, respective identities.

As it turned out, the two managed to shake off the pressure of their parents' accomplishments and fame. But that was also made possible because both Danica and Oyo seemed to take things easy and accept their job breezily, without stressing themselves to live up to people's expectations.

Between the two, it looks like Oyo is the more serious one when it comes to his acting. He recently made the move to ABS-CBN for good opportunities to further his career. Danica, on the other hand, is noticeably more focused on her business and culinary know-how, though she's still does some acting on the side. She also married recently with cager Mark Pingris.

But going back to Oyo, and least we forget, he seems to inherit his father's reputation as a "ladies' man". Consider the names Anne Curtis and Angel Locsin and you'll probably agree.

The Manzano's. Long before he entered local showbiz, you've been hearing his name from his famous mom, who would usually end her weekly variety show Vilma with, "I love you, Lucky!" Almost twenty years later, Lucky would be introduced to the public as Luis Manzano.

Luis has so far starred in about 15 movie and TV projects, and one thing notable about him is his hosting prowess. The guy is just like his dad Edu Manzano-articulate, witty, and very funny.

In his latest movie Ang Cute ng Ina Mo, Luis showed he also has a knack for comedy. And in Rounin, the first TV epic of ABS-CBN, where he played Juris's role, he proved he can try his hand at action films. Indeed, acting is in his blood!

The Revilla's. Rhugman05, a PEP user, is right about including the Revilla family in the list. Bong Revilla, even after he got elected as senator, is still active in making movies, and is visible on TV. His wife Lani Mercado is currently part of GMA-7's TV series Lupin,and hosts Moms on QTV-11.

Bryan and Jolo are clearly following the footsteps of their parents. The eldest son used to be part of the defunct teen show Click, while Jolo was a mainstay of HP: Ibang Level Na 'To. Both also starred in Exodus: Tales from Enchanted Kingdom, a film produced by Bong in 2005. Inah, the eldest daughter of Bong and Lani, is slowly inching her way to showbiz. She appeared on the movie Kapag Tumibok and Puso (Not Once But Twice).