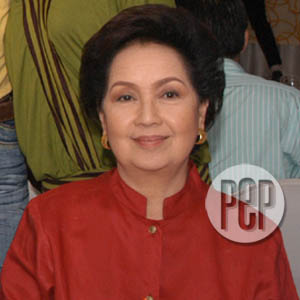 Susan Roces was given a surprise early birthday party by some close friends last Thursday, July 19, on the set of John En Shirley where the beloved veteran actress is one of the mainstays.

Entertainment columnist Ricky Lo, in his column today in the Philippine STAR, gave the readers a glimpse of the celebration that happened nine days before Susan's actual birthday on July 28.

John En Shirley's episode which will be shown this coming Saturday, July 28, was really intended as a special birthday tribute to Susan, although from the very start she was entirely clueless about how everything would go .

Special guest Martin Nievera performed four numbers: "Ikaw," "If," "Kahit Isang Saglit," and "Somewhere." Ricky reported that the celebrant held back tears during the rendition of "Somewhere" as it definitely reminded her of her late husband Fernando Poe Jr. It was the couple's theme song.

Susan was heard saying, "I don't want to cry," her voice cracking a bit while listening to the song.

Piolo Pascual and fellow hunk Sam Milby performed a duet of "She" and Billy Joel's "Just The Way You Are," which got Susan cheering and clapping for more.

Tinseltown's hottest young love team, Kim Chiu and Gerald Anderson then dedicated the song "Close To You" to Susan, who was obviously very touched by the effort shown by the young stars.

As she always did since FPJ passed away, Susan said that she will celebrate her birthday quietly, together with close friends and immediate family members.