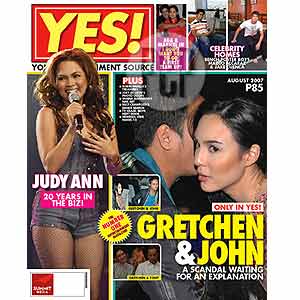 A source close to Gretchen Barretto concluded, "Tony [Tonyboy Cojuangco] is like that with all the women in his life. He forgives."

Thirteen years ago, Gretchen Barretto met Antonio "Tonyboy" Cojuangco at a birthday party. Nobody expected that the relationship of a 55-year-old billionaire and a 36-year-old actress would last. One daughter, several controversies, and a "kisscandal" later, they are still together.

YES! magazine's August issue gives answers to questions left unanswered by the concerned parties—Gretchen, Tony, and John Estrada—about the infamous photo that circulated on the Internet. Several sources shed light on the controversy.

KISSCANDAL. Both Gretchen and John admitted that they were indeed the two people kissing in the photograph taken at Rufa Mae Quinto's surprise birthday party.

Was there an affair? Why did they pose in such a compromising position? Who made the photos public?

On the other hand, how did Tony react? Why is he still with Gretchen? What are the consequences of Gretchen's actions?

A source close to Gretchen concluded, "Tony is like that with all the women in his life. He forgives."

WHEN GRETCHEN MET TONY. When the actress started dating the tycoon, it was no secret that several people raised their brows. The Cojuangco matriarch, Tony's mother Imelda or Meldy, was said to be one of them.

How did Meldy react to the scandalous photos? Did she feel vindicated?

To the many who speculated that the illness was caused by the recent "kisscandal," a source close to the family clarified, "There was no heart attack or any of the previously rumored illnesses..."

Tony and Gretchen, along with a team of doctors, flew to Boston, Massachusetts, for Tony's operation. Gretchen stood by his side all throughout the ordeal.

Tony's operation was a success.

What's next for Tony and Gretchen? Is it really love that's keeping them together?

Grab the latest copy of YES! and get all the answers no one else has.
Read Next
Read More Stories About
Gretchen Barretto, Tonyboy Cojuangco, John Estrada
Post a Comment
Featured
Latest Stories
Trending in Summit Media Network