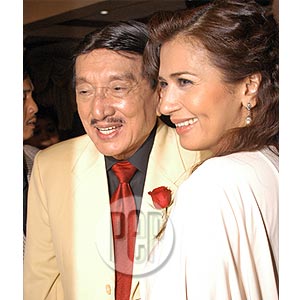 The wedding of Rodolfo Vera Quizon, better known as Dolphy, and Esperanza Padilla, or Zsa Zsa, has been a four-year-old plan. During the 80th birthday bash of the Comedy King, he expressed his fervent wish to marry the Divine Diva soon.

As early as 2003, there were loud talks about a grand Las Vegas wedding for Dolphy and actress-singer-host Zsa Zsa Padilla. Another one was set for the year 2006, just before Christmas. But all plans were aborted.

As background, a write-up—posted on Filipino Express Online—wrote that in October 2003, the Office of Solicitor General (OSG) entered the picture because Dr. Tatlonghari no longer pursued the case. OSG argued that the actress had violated public policy because she was still married when she started her relationship with Dolphy.

In a another report posted by Balitang Marino.Com, the fiscal reviewing the case filed for reconsideration, noting that the filer, Esperanza Padilla-Tatlonghari (the Divine Diva's name in real life), was not the aggrieved party, as she claimed.

So up to now, 20 years after the Comedy King and the Divine Diva fell in love, they're still unmarried. Dolphy is now 79 and Zsa Zsa is 43.

At first, disappointment engulfed Zsa Zsa, mother of daughters Karylle, Nicole, and Sia, whenever she thought of the annulment case. But now, she just laughs things off. In her website, she jokes, "yung mga parents namin ang hindrance."

In an interview with PEP (Philippine Entertainment Portal) on March 17, she said: "It's better to look at it on the bright side, ‘di ba? I'm not mad but kind of disappointed because it's been long overdue na. But I know that the Lord has good plans. Let's just be positive about it all."

On July 28 at the Villa Immaculada in Intramuros, PEP got the chance to get the Comedy King's side on the subject. It was the celebration of his 80th (tecnically, 79th) birthday.