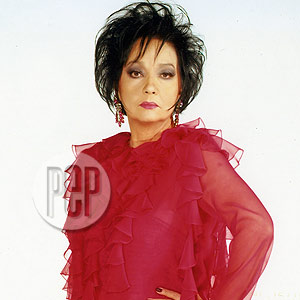 She is feared. She has strong personality. She's got a voice like thunder. She speaks her mind. That's Celia Rodriguez, one of local showbiz's reel wicked women. For almost four decades now, she has been making the lives of the bidas miserable.

Kontrabidas play an important role in any movie or TV show. They're the provocateurs who make your beloved heroinecry or get angry or even go crazy. Their dialogues are what we viewers remember so well that we even mimic their words and actions in ordinary conversation. Without these "evil" catalysts for the oppressed bida to prove her worth, a telenovela or film in any genre would fall flat.

PEP (Philippine Entertainment Portal) pays homage to local showbiz's notable kontrabidas. This List presents some lady villains who have become icons in the industry, not for their sexy or moral appeal but precisely because they made us feel as miserable as the bida. Sometimes they even reminded us of why we allowed ourselves to be oppressed in real life.

For proper clustering, we divide them into three groups: the veterans, the shifters, and the new generation of female baddies.

How did we arrive at this special List? We did an internal survey, recalled the movies that became sensations for memorable dialogues/actions between the protagonists and antagonists, and also noted how the villains evoked strong reactions and emotions from the spectators.

THE VETERANS. First, here are the character actresses who each have become an institution in showbiz. These are the "wicked women" known for their frightening stance and facial expressions over several years in our local movie history.

Bella Flores. She is dubbed as the Lady Dean of Kontrabidas. You look at her eyebrows and piercing eyes, you hear her harsh-sounding voice and you get really petrified. Her effortless "mataray na mukha" has terrorized the country's top-rated actresses like Vilma Santos in Trudis Liit and Gina Alajar in Robina.

Odette Khan. Child stars would get scared when Odette's eyes started to widen. She was known for her characters who maltreated people, especially children. Marian Rivera became a victim of Odette's character's wrath in the defunct afternoon TV series Muli. The "slapping" scene was supposed to be just an act, but Odette got so immersed in her violent character Marian got bruises.

Celia Rodriguez. The sophisticated and classy villainess. She's usually the matapobreng biyenan or the wicked relative. Celia also became Darna's archenemy. She played the role of Valentina thrice, and in the 2005 Darna TV series, she was Braguda, the queen of all the villains.

Cherie Gil. Back in the ‘80s, she usually played the jealous girlfriend or devious friend. She was the ambisyosa who would do everything, even at the expense of the other people, just to get what she wanted.

"You're nothing but a second-rate, trying hard, copycat," she spat at Sharon Cuneta in Bituing Walang Ningning. That immortal linemade Cherie famous. A writer noted, who recalls Sharon's dialogue in that scene? Cherie has the most expressive eyes and is truly a strong presence onscreen. How does she do it? Aside from talent, genes. After all, she's the unica hija of Rosemarie Gil, also a famous character actress.

THE SHIFTERS. Local showbiz has a lot of shifters. They're the ones initially known for their pa-tweetums role in teenybopper films and TV shows, or the sidekicks of the lead characters, or even the lead roles. Then one day, they emerged on the screen wreaking havoc on the life of the main star.

Jean Garcia. Jean started her showbiz career as a regular member of That's Entertainment. She was the reel, then eventually real partner of Jigo Garcia, also of the same show. At one time, Jean was even paired with Richard Gomez and Aga Muhlach.

In 2000, she became Madame Claudia in Pangako sa ‘Yo, the main adversary of Amor Powers (played by Eula Valdez) and the spike in Angelo's (played by Jericho Rosales) and Yna's (played by Kristine Hermosa) relationship. Critics said then that the Jean-Eula tandem was truly remarkable. People loved Amor Powers partly due to Madame Claudia's meanness.

Bing Loyzaga. She is another product of That's Entertainment, where her husband Janno Gibbs was also a member. She also played several "confidant" roles in Sharon Cuneta movies like Kahit Konting Pagtingin, Tayong Dalawa, and Kapantay ay Langit; and also as a leading lady to action stars.

In 2002, Bing became a major force in Kay Tagal Kang Hinintay, top-billed by Bea Alonzo. She played the role of Brigitta. She was also wicked in the three Enteng Kabisote movies.

Princess Punzalan. The advise-giver of Lovingly Yours had a career overhaul and transformed into a scheming relative. Princess Punzalan became a thorn to Claudine Barretto in Mula Sa Puso, and to Sunshine Dizon in Kung Mawawala Ka.

She played the roles of Selena Matias and Ernestina Montemayor, respectively, and became one of the country's most-hated kontrabidas. In fact, when her mean character met a most tragic death in Mula sa Puso, viewers said, "Buti nga kay Selena."

Sheryl Cruz. During her earlier career, Sheryl Cruz used to be one of showbiz's teen queens. For the longest time, she was Romnick Sarmenta's perennial screen partner. Her reel romance with Romnick turned real, but they broke up later. She left for the U.S.

In 2004, she made a comeback in local showbiz and became part of Mulawin, Mano Po III: My Love, and Shake, Rattle, and Role 8. But she proved her versatility as an actress when she played Valeria's role, the great rival to Bakekang. The viewing public hated Valeria, and raved about her performance. In one of her PEP interviews last January, she said she might take a break from kontrabida roles. "It's very difficult," she admitted.

But after Bakekang, the clamor for kontrabida roles persisted. And so, she starred in the sineserye Sinasamba Kita, and is presently part of the cast of Mga Mata ni Angelita. In both TV series, she's the antagonist.

THE NEWBIES. And of course we have the new breed of lady villains. Some started young. Others are flexible enough to do both the bida and kontrabida roles, without confusing the audience. They're feisty, they look "mataray", and they've got the spunk.

Gladys Reyes. People used to loathe Gladys Reyes when she played Clara in the longest-running telenovela Mara Clara. She pulled off her character so well that even the fans of Judy Ann Santos, who played Mara in the series, hated Gladys for every scene that she hurt their idol. She played a major kontrabida role once, but she'll be remembered for eliciting tears from Judy Ann Santos, the young superstar of their generation.

Recently, Gladys played the comic antagonist in Bakekang, proving her versatility as a character actress.

Alessandra de Rossi. In real life, Alessandra is known for her frankness. She's fearless when it comes to giving her comments on issues, and very upfront in confronting people who offend her.

But Alessandra is also known for her award-winning portrayal in Mga Munting Tinig, Barcelona, and Homecoming.

Mylene Dizon. Mylene, without saying anything, looks mataray. Her role in Sa Dulo ng Walang Hanggan as Angeline Crisostomo and Princess Charming are proof that this lady is more than mataray on screen.

And if a TV program requires a female baddie to maltreat a kid, Mylene would be the top choice.

Then there's also Liza Lorena, Luz Fernandez, Chanda Romero, Sunshine Dizon, even Anne Curtis, our list can go on. We're sure you can come up with your own list, so feel free to make one in the Comments Column.

Lastly, watch for the list of well-known bad guys in local movies and television. You can send your top-five list to info@pep.ph, and let us know why you think they make effective villains.