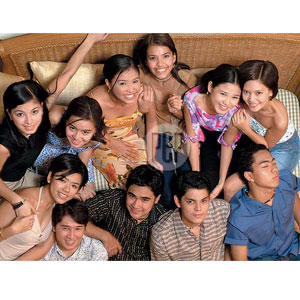 Angel Locsin (leftmost, second row) during her Click days. A few years after she was launched as Charley, her role in the youth-oriented show, she became the biggest female star of GMA-7.

In the beginning, she was a very simple and unassuming girl who loved her "Dada." Her life revolved around school and swimming. One time, she cut classes and went to SM North EDSA with her best friend to shop for groceries. A lady approached her and asked if she'd be willing to do a commercial. The young lady said, "Pwede!"

The life of Angel Locsin has been constantly changing since then.

ANGEL'S TAKEOFF. As fate would have it, she eventually got acquainted with Becky Aguila, who became her manager and her surrogate mother as well. The world of showbiz officially opened its doors to Angel Locsin in 2000.

When she talked about her family, the public would learn that she was very fond of her dad, Angel Colmenares, who lost his eyesight several years ago; that she had five siblings, four of them from Mr. Colmenares's first family. But hardly anyone would hear a word from her about her mom.

This revelation sent the fans of Angel ballistic. On July 27, in PEP (Philippine Entertainment Portal), they lashed back at Manay Lolit through the "Comments Column" following the article posted on the subject by Roldan Castro.

Good point. However, being a newsmaker, Angel has to face up to any and all information being attached to her, whether to verify or to deny. Meantime, PEP did its own research by talking to Angel's former neighbors in Baesa, Caloocan City.

One former neighbor, who refused to be publicly identified, had her theory on the possible reason Angel does not usually mention her mom. In her email, the former neighbor wrote that Angel's mom left to go with another man when Angel was just a budding teen star. Our informant said it was the "usap-usapan" in their small barangay several years ago, but nobody from the Colmenares family confirmed it, and no one in their barangay bothered to verify it. In addition, she seconded Lolit Solis's "maid" allegation.

But even if some of them believed that the tittle-tattle about Angel's mom was true, these former neighbors say they did not think less of Angel. Baesa Adventist Academy's principal, Ms. Luzviminda Saramosing, said about the school's former student Angelica Colmenares:

"She came to Baesa for one school year. She's a good student. The mother would excuse her to join beauty contests in the municipality. She is loved by her classmates. Ang bait-bait na bata."

YES! magazine featured her house in its September 2006 issue. The article mentioned that Angel is renting an apartment for her mom. "May boyfriend siya dati, pero ngayon wala—thank God," Angel disclosed. YES! wrote that she was smiling and rolling her eyes while sharing that tidbit about her mom.

Becky Aguila is probably the closest person that Angel can relate to as a "nanay." She calls the lady "Tita." In a PEP article posted on February 5, Becky said: "I love her like my own." Angel also treats the twin daughters of Becky, Katrina and Paula, like her own blood-sisters.

THE NEWCOMER CLICKS. Six years ago, Angel first appeared on GMA-7's Click. She played the twin sister of Richard Gutierrez and the love interest of Bryan Revilla, and later, of Railey Valeroso.

Her contemporaries, Chynna Ortaleza and Karen delos Reyes, are both products of TV ads (Chynna endorsed a soft drink brand, while Karen appeared on a popular fast-food chain TV commercial). Write-ups would later divulge that Angel's work attitude and versatility put her a cut above the rest.

It was on the set of the youth-oriented show that she met Mico Sotto, the son of Vic Sotto's older brother Maru and radio host Ali Sotto. The two fell in love but their relationship was tragically cut short. Six months after they officially became a couple, Mico accidentally fell from his ninth floor condominium unit, causing the young actor's untimely demise.

WINGS FOR ANGEL. In August 2004, Angel spread her wings as Alwina in GMA-7's grand production, Mulawin, in a role that would have been Maxene Magalona's if the latter had not declined it in favor of her studies. Angel was paired with Richard Gutierrez, now the biggest young male star of GMA-7.

Mulawin, together with GMA-7's Extra Challenge, dramatically pulled up the average-to-good ratings of the network's primetime block. The show averaged 35.5%, the highest ratings for a fantaserye at that time.

After Mulawin, Angel became Narda in Darna, another GMA-7 fantasy-adventure. Sans wings, Angel continued to soar to the skies and to capture the hearts of the public. She became every kid's heroine and every man's fantasy. She posed for FHM magazine the same year Darna was aired and became FHM's sexiest Pinay in 2005.

Then she also did Majika and Asian Treasures, both successful primetime shows of GMA-7. From 2004 to 2007, Angel was a staple figure on TV's evening programming. In between, she top billed blockbuster movies like Let the Love Begin (GMA Films); Sigaw and Text (Regal Entertainment); I Will Always Love You, Mulawin: The Movie, and The Promise (GMA Films and Regal Entertainment).

And then, the biggest prize of them all: the numerous endorsements. GMA-7 senior vice-president for entertainment Wilma Galvante recently announced that GMA Artist Center closed deals with various brands for Angel Locsin amounting to 60-million pesos.

These days, some PEP users wonder how Angel got so lucky. They say "she doesn't really have the talent." Indeed, her acting is not outstanding and there are many young stars who can deliver on those roles better. But the people who have worked with her attest to her dedication and professionalism.

He fell in love with the girl he was calling, "‘Tol," which is the Tagalog slang for "brother."

And they talked, admitting to each other that they were both feeling "something" for each other. At dawn of February 13, Oyo said, "I love you." And they marked that as their anniversary date.