Eraserheads guitarist Marcus Adoro: A life away from trappings of rock n’ roll 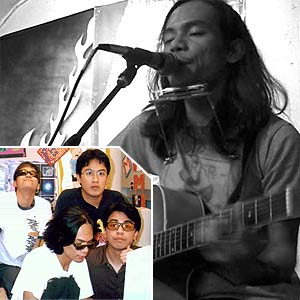 Former Eraserheads guitarist Marcus Adoro retreated to the unpredictable waters of La Union and finally found the life that eluded him when he was on the roller coaster lifestyle of the biggest rock act of the ‘90s, the Eraserheads (inset).

If you lived through the ‘90s, it's impossible to look back without thinking of the phenomenal band of the decade, the Eraserheads.

Some of the Eraserheads' well-loved songs are now videoke staples: "Ligaya," "Pare Ko," "Toyang," "Magasin," "Alapaap," "With a Smile," "Torpedo," and "Huling El Bimbo," among many others. After releasing 10 successful albums and numerous hit singles, the band called it quits when chief songwriter Ely Buendia left in 2002 amidst reports of bitter tension and animosity.

The three remaining members decided to continue and changed their name to Cambio, signifying a new beginning. But even as the newly named band was busily trying to regain its former following, guitarist Marcus Adoro bid goodbye to lead a normal life away from the chaotic world of the rock n' roll.

Marcus, known to the fans as the punk-yet-quiet Eraserhead, retreated to the waters of La Union and settled there—completely abandoning the city and the noisy life he used to have here in Manila.

"I got bitten by the surfing bug," he added, referring to his long-standing hobby, which dates back to his popular band days.

Though he denies having felt burned out, Marcus admits he got tired of the rock n' roll lifestyle and of that never-ending question about the demise of the most influential band of the nineties, or perhaps of all time.

He revealed that he's always been fond of surfing and the beach which he thinks is part of his background.

"As of mid ‘90s, may nagsabi na sa akin na may surfing culture na sa ‘Pinas at isa ang La Union sa mga lugar na yun. When Dong [of another rock group, Yano] came out of his cosmic sleep [depression], I treated him to a road trip up North. We ended up in the surfing place in La Union by accident. So dun ko nakita. I took it as a sign. ‘Tsaka para na ring homecoming sa akin ‘yun kasi Mama grew up in the next town, so it's also a back- to-my-roots thing for me."

Unknown to many, it takes a lot of discipline and self control to be a surfer—a complete turnaround from the usual zombie-like routine of a musician.

"I was there as a surfer. ‘Pag surfer ka, kailangan mo matulog ng maaga, para magising ka ng maaga, Hindi ka pwedeng mag-surf nang lasing o puyat. Kase ‘pag may nangyari sa ‘yo dun, wala kang ibang sisisihin. May sariling kultura ang surfers, natutunan ko at na-experience ‘yun. Gusto ko ‘yung nasa beach, ‘tapos may sunset everyday. I enjoyed more than a thousand of those. I had the luxury of choosing my food, my diet because I also enjoy cooking. Wala akong cable or telephone, but I had DVDs and my CDs.

"Yup, mas na-enjoy ko ‘yong sinasabi mong ‘simple' kasi naranasan ko ‘yung hindi simple. ‘Yun naman yata ang gusto ng lahat, but then most of the time, the simplest thing is usually the hardest to do. Kunyari maging good boy," he said with a grin, when asked if he enjoyed living a simpler life for six years while in La Union.

SURFING BACK TO MANILA. While in La Union, Marcus didn't exactly hang his guitar. The only difference is that he indulges in music only to enjoy it, as opposed to when he had to strum to make a living.

Marcus didn't become entirely quiet. In fact, some new songs and even videos coming from him sporadically found its way into Manila, though they're mostly catering to the underground market. He uses an alias to hide his real identity.

But staying six years in hibernation, away from the spotlight, brought a wealth of new materials he feels worth sharing with the public. Thus, Marcus can now be occasionally spotted doing some gigs around Manila with the band called Markus Highway.

He describes his present music as "organic" Pinoy rock—"a potpourri of local folk, pop, country, reggae and punk." And definitely, it's something he'd love to formally record in the immediate future.

"Pinoy s'ya," he explicated about his music. "Nakatingin ako sa roots ng Pinoy as opposed to looking for inspiration elsewhere."

In La Union, Marcus is noticeably at peace and contented despite living a more serene un-rock star kind of existence. Looking back, Marcus said that he never regretted anything, and he likened the success of Eraserheads to an exciting journey that inevitably had to end.

"We recorded 10 albums and toured, we got to see the world...well, not all of it, and I'm nothing but grateful to Ely and Raimund and Buds and to the record company and the fans. I had a good time. It was a good trip. We had the worst hairdos so I think I'd love to change some, not just mine," he laughed as a parting shot.