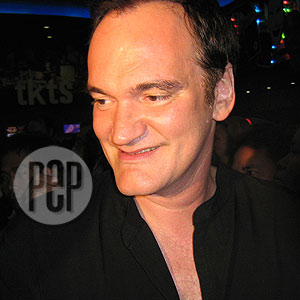 Quentin Tarantino is overwhelmed by the warm welcome given by local audiences during his appearance at the Cinemanila 2007 opening ceremonies last night, August 8, at the Gateway Mall, Cubao.

The director of cult films Kill Bill and Pulp Fiction is an avowed lover of Filipino films. Quentin Tarantino admits that it has always been a childhood dream of his to visit the Philippines.

During the opening rites of the ninth edition of Cinemanila at the Gateway Mall, Cubao, last night, August 8, the famous director told the press:

"I've been wanting to come to the Philippines since I was a little boy, and to actually come here, actually have people know who I am and actually welcome me in this way...it's overwhelming. Absolutely overwhelming!

"I'm a big fan of a lot of Filipino filmmakers. Actually in my new movie, Death Proof, I actually took a line from Cirio H. Santiago's film The Muthers, which we're gonna be showing here later in the festival. Basically, I just ripped it off."

Tarantino is one of three awardees of the Lifetime Achievement Award in this year's Cinemanila International Film Festival (CIFF). The Hollywood director received the distinction for his iconic contributions to the world and independent cinema and his continued advocacy and promotion of Asian films.

Maleangreau, director of the Belgian Independent Film Festival, is known for the development of independent cinema in Belgium and the promotion of Asian and Philippine cinema in Europe.

Prince Chatri, a Thai film director and screenwriter, is honored by Cinemanila for his iconic productions in Thailand and chronicling the history of the Royal Family of Thailand.

The Lifetime Achievement awardees received a trophy carved with a bulol, a northern Luzon (Ifugao) deity whose presence ensures a good harvest. According to Filipino folklore, the bulol was a tree that wanted to become a man. The CIFF invokes the bulol as a blessing towards Filipino film industry in general—as a prayer towards a good harvest, a plentiful bounty of excellent Filipino films.

When asked if he would return to the Philippines, Tarantino replied, "That could very well happen...It's just like a seed, sometimes the seeds grow, maybe they may grow up next year, maybe they grow up fifteen years from now."