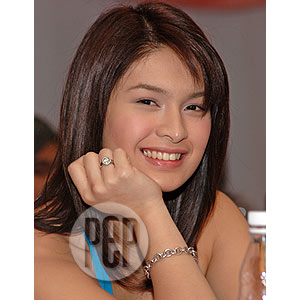 "Everything fell into place at the right time," Pauleen enthused in a taped interview with Startalk yesterday, August 11. She then announced that she is now Mayor Gatchalian's girlfriend.

"'Pag everything falls into place it's effortless, di ba?" echoed Mayor Gatchalian with Pauleen sitting beside him. "There's no effort, it just glides through."

Their age gap doesn't pose any problem. Sherwin is 33 and Pauleen will turn 19 in November. In fact, they both said that they're determined to make it work to their advantage.

"Definitely, with a 33-year-old guy, It's very interesting lang kasi I learned a lot of new things and surprisingly I watch news now," said Pauleen who had no interest in even reading the newspapers before.

For Sherwin, hooking up with a showbiz personality is now something he has to deal with and get used to.

"I'm not used sa mga ganito actually, but okay lang. I'm not used to it, in other words. But kanina GMA was also there, pero ini-interview ako tungkol sa baha. It's different when you're being interviewed about something, an issue about your city and it's different if you're being interviewed about your personal life. So ganun talaga, e," he said candidly.

This early, it may be also advisable to remind him of the intrigues that will surely catch on now that they finally admitted the true status of their relationship.

"Dapat nga ako ang maging seloso because siya nasa showbiz, e," countered Gatchalian with a smile. "Ako I'm just surrounded with my constituents, she's surrounded with different boys. I trust her, e. She's a mature person, so she looks like she knows where her place is."