Ruffa Gutierrez to Yilmaz Bektas: "I love you and you have to change." 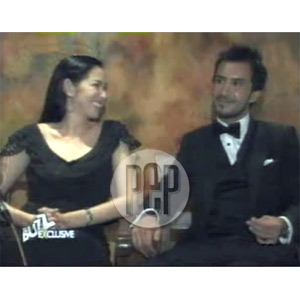 "It's only reason why I'm breathing because of my wife and my two kids," answered Yilmaz when asked how important his family is to him.

"I love her," said Yilmaz Bektas about his estranged wife Ruffa Gutierrez in his interview with The Buzz.

Ruffa replied, "I love you and you have to change. Be sweet and be kind."

The Bektas couple has been feuding for the past few months because of claims of "abuse" and "betrayal." The Turkish businessman arrived in the country last Friday, August 10. His agenda: to fix his marriage.

Yilmaz said, "She send to me a message and she told me I have to come to pick them up. Those were the magic words."

Ruffa explained, "Well, he kept saying, ‘Come meet me here. Come meet me there.' I think it's just proper that he's the man and he should come to me in the Philippines.

"I think this trip has long been overdue. He's been saying since March that he's coming, but he ends up going to Maldives, or to Hong Kong, or to China. Everywhere except Manila. And even in L.A., he said he was gonna come, but then he ended up in Miami.

BRUTUS. During the interview with the entertainment talk show, the couple was candid enough to engage in a banter about their past statements about each other.

"In history, you know who's Brutus, right? Because it was Julius Ceasar believe this person too much. He betrayed [him]," answered Yilmaz.

Ruffa retorted, "How did I betray you?"

Yilmaz cleared the air, "Because she's [Ruffa] only my friend, not just my wife, my friend [too]. Because maybe she knows I'm not speaking too much. My stories always the secret in my heart. Because I don't want to make her sad."

Ruffa asked candidly, "And you found me in the garbage?"

Yilmaz teased, "Next to the garbage!"

"Did you ever hit me?" asked Ruffa.

Yilmaz was hesitant to reply, "It's not really nice to answer this. If you really wanna to show myself bad, like I'm the bad person. You're the good person. I'm the wrong one..."

Ruffa explained that she is not trying to put her husband in a bad light. She is just trying to clarify earlier reports that Yilmaz denied having hit her.

"I admit this and if you gonna follow, if you're gonna check again. I admit this. I said I'm not proud, whatever I did. I repeat this several time, I am not proud, but I'm not a messenger of God. I'm not a Holy person. The same time when you getting the upset high, maybe you cannot hold. Maybe I can deny it right now. How you can prove it? Do you have evidence? No! And just again I be honest, I say I did, but I'm not really proud. I'm shy [embarrassed]," revealed Yilmaz.

BEKTAS FAMILY. A day before Yilmaz arrived, Lorin, the couple's firstborn, celebrated her birthday. Baba, as Lorin and Venice call their father, confessed that he missed his wife and kids during the time they were apart.

"Both of them are cute and beautiful, maybe because they are my kids. I don't know what people are thinking," he commented.

Ruffa noted, "They're so in love with him [Yilmaz]. They adore him. I remember when he was sleeping, because he was jetlagged, and the kids went inside the room, you know they're just there looking at him and then looking at me, staring [and] giggling. That's the most painful part, seeing your kids. They love their father so much. And then there's a problem within the family. I think that's the most painful part. Because if we didn't have kids..."

Both said in unison: "Goodbye!"

The kids had no idea what their parents were going through.

"I believe we gonna erase in memories and history. And I'm gonna give all my best to my children," Yilmaz pointed out.

He disclosed, "Just today I saw Venice, actually it's not the correct moment to hug each other and when we hugged each other, and I saw that she's smiling. It's the most beautiful thing to see."

HOME. At this point, the husband and wife are still fixing loose ends in their relationship.

"I have to win my wife back and also her parents, but she have to also win me back," emphasized Yilmaz.

Ruffa countered, "Well, first of all you have to go with me tomorrow and see our psychiatrist. And then we have to listen to what she has to say. Because I have no problems with Yilmaz. I mean when he's super sweet, he's super sweet, but when he's angry, you know he's really angry."

Yilmaz expounded, "It's actually my aggressive side she talking about, but my business is, you have to be aggressive. Sometime when she saw me angry, high, and upset, and she believe it's not much me. Life not really easy. I have to keep myself not anger or whatever she's saying. I should leave when my business finish."

Even though their future is still uncertain, Ruffa is steadfast in not returning to Istanbul where she and her husband built their home.

"I don't want to go back to Istanbul anymore," she stressed.

Yilmaz reacted, "Because whatever she said, right now, I not agree because it's not up to the country. If my wife there, I'm gonna stay there. When you love each other, the country is not really important."

Since their separation, he has been living in Europe. He is hoping to relocate his family there too.

"I will gonna check her schedule and because she signed a contract already. Right now I'm living in Europe, but I don't want to put her in a difficult situation because of her business. I will like to she following her career because her happiness, my happiness too. And then we're gonna see for the space. We can find the space. Of course, we try to find it and we're gonna find it. And she will gonna in the Europe. I'm going to be in Manila until her business will finish, her contract... [It's] up to the contract, which kind of contract she signed because she doesn't need money," he said.

He revealed that he is open to following steps for his family to be complete again.

"I think he should apologize to my family. I don't know if it's the right time now. I think they're both not ready to face each other because there's a lot of emotion involved. Of course, you can't blame my parents as well because you started sending all these nasty messages to them," advised Ruffa to her husband.

Yilmaz agreed, "Her family, I don't have really a problem. If I know the Ruffa, she's not safe here, she not will gonna come here alone. I'm so sorry I'm not trying to again show I have a power something like this. I'm not gonna send it to her alone because she is queen to my heart and queen of to this huge family.

"She will gonna bring the personal bodyguards, my relatives and then assistants from my side to I can be relaxed she in good hands. Mother of two kids and then you're my wife, you have to be careful."

Ruffa asked bluntly if Yilmaz is willing to stay in the Philippines for a year.

"Yes, why not," Yilmaz said, smiling.