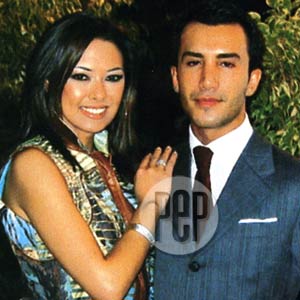 Yilmaz Bektas, along with estranged wife Ruffa Gutierrez, has reportedly agreed to go through professional help to save their marriage.

Ruffa Gutierrez and Turkish husband Yilmaz Bektas have reportedly agreed to seek professional help to shore up their turbulent marriage.

According to columnist-host Cristy Fermin, the two realized that salvaging the relationship entails serious work considering the severity of the issues that led to the breakdown of their union.

Resorting to psychiatric help and marriage counsellors is a usual practice commonly done in Western countries to help a couple resolve whatever problems they have that threatens to tear the marriage. Here in our country, Filipino couples are usually not open to the idea due to social stigma associated with psychiatric help.

Personally, Dr. Bautista assessed that Ruffa, at the start, never wanted either the separation or the divorce. What her patient wanted instead was "for the violence to end and the possibility of reconciling, with her being protected from future violent outbursts."

She also noted Ruffa's wish for Yilmaz to personally visit her here in the Philippines to pursue her and work out an arrangement that is realistic for the betterment of the marriage. This is where the need for counseling comes in.

FIRST MEETING. Cristy also revealed in her column today, August 13, in Bulgar that Yilmaz was supposed to grace The Buzz live last Sunday, August 12, for an interview but changed his mind at the last minute. Instead, Yilmaz requested to have a taped interview with Ruffa Gutierrez at his side.

It was the couple's first meeting after months of exchanging heated arguments through various media outlets. Yilmaz bravely arrived in the country last week to see his eldest daughter Lorin who celebrated her birthday last August 3 and also to talk personally with Ruffa about the possibility of reconciliation.

If things work out fine, Yilmaz reportedly wants Ruffa and their children to permanently settle in Europe, although it would still depend on the approval of Ruffa's family.