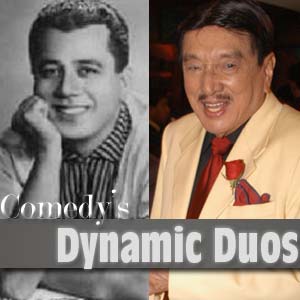 Dolpy and Panchito, comedy's classic duo. Spanning over four decades of laughs, these two never fail the audience when it comes to slapstick humor. Even in real life, the two have become best buddies.

Although comedians can deliver most of the act's slapstick, it won't be as interesting without the support of a funny buddy. Comedy sidekicks add more life to the act with their lively reparteé and sometimes becoming the butt of jokes. Comic icons like Dolphy, Joey de Leon, and Vic Sotto wouldn't be as funny without the follow-ups of Panchito, Rene Requiestas, and Jose Manalo.

The list of comedy duos here on PEP (Philippine Entertainment Portal) doesn't go by any funny-to-funniest yardstick; all of them share the same tenacity and passion to make people laugh and forget all about the problems of daily life. And of course, we do not disregard the fact that you may also have your Comedy Duos, so feel free to post them in the comments section of this article.

Dolphy and Panchito. The original funny duo of Dolphy and Panchito literally brought tears of laughter to the masses for four decades. This duo became well known during the 50's and rose as one of the most successful tandems in Filipino comedy.

Dolphy, also known as the Pidol or Golay, started out as an onstage performer during the Japanese Occupation. The late Fernando Poe Sr. gave Dolphy his first break as a character actor and Dolphy later became recognized as a comedian for his roles in Jack en Jill and Facifica Falayfay.

For a span of nearly five decades, Pidol made comedy films alongside fellow comedians Panchito, Pugo, Tugo, and Babalu, among others. Dolphy is best known for his role as John Puruntong in the sitcom John En Marsha with the late Nida Blanca.

The Comedy King has had a lot of funny sidekicks but it was Panchito Alba who stood out among all the others. He was recognized as the perfect match for Dolphy's brand of humor. Panchito started out as an actor for Sampaguita Pictures in 1954. He became a full-time comedian when he starred with Dolphy in the 1959 film, Kalabog en Bosyo.

One of the duos' most notable performances was when they did the opening for the Beatles' show at Rizal Stadium in Manila in 1966.

Joey de Leon and Rene Requiestas. Who could ever forget Starzan and Cheetae? These two comedians made it big with their parody of the film Tarzan. The first movie (Starzan) became such a hit that they followed it up with Starzan II and Starzan III—all in one year.

Joey, a member of the famous comedy trio with Tito and Vic, is one of the hosts of the long-running show Eat...Bulaga. Joey started out as a DJ for some of the top FM stations mostly owned by ABS-CBN. Also known as a songwriter, Joey composed the Filipino classics, "Ipagpatawad Mo," "Awitin Mo at Isasayaw Ko," and many more.

Rene Requiestas was personally chosen by Joey de Leon for his funny nature and trademark toothless grin. Rising out of poverty—he was hawking cigarettes on the streets when he was discovered by a talent scout—Rene became one of the most successful comic actors in Philippine cinema. It has been said that Rene was one of the actors who raised profits for Regal Films with his comedy roles in almost all his movies.

Comedy really runs in the Quizon blood. Eric certainly made a name for himself in the world of comedy. The actor-director also played more serious roles such as Markova: Comfort Gay and directed shows like Majica, and Asian treasures.

Redford White is a "white guy" who sounds very Pinoy. He started out as a solo comedian in the films Soldyer! and A Man called Tolonges. He captured notice with his major role in the film Hee-Man: Master of None.

Both artists' creative juices flowed harmoniously, giving life to hilarious impersonations of political figures, fellow actors, and their perfect spoofing of popular commercials and TV programs. Together they starred in the hit gag show Tropang Trumpo in ABC-5 and made airwaves from 1993 to 1998. Michael V. and Ogie eventually left the show in 1995 to start a new gag show with GMA, Bubble Gang—oneof the longest running gag shows in the Philippines.

Ogie Alcasid, also known as "The Songwriter", is a funnyman at heart. Ogie first explored his comic talent by teaming up with Janno Gibbs. And then came the opportunity to work with Michael V. With Tropang Trumpo and Bubble Gang, the two moved up the ranks to become comedy icons.

Michael V. a.k.a "Bitoy" or "Toybits" is a master in parody and impersonation. Bitoy started out as a rap artist and eventually made it as an actor in Banana Split with Joey Marquez. He became well known when he was cast with Ogie Alcasid in the films Ano ba Yan and Manalo en Michelle.

Vic Sotto and Jose Manalo. Everyone knows ‘Bossing' as an iconic funnyman. Most popular for his part in the Tito-Vic-and-Joey trio, he became most associated with the noontime show Eat Bulaga. Three times in a row, Vic Sotto was named Philippine Box Office King for his Enteng Kabisote trilogy.

Vic started out originally as a singer and composer and then teamed up with his brothers Tito and Val in the gag show OK Lang on IBC-TV. During his stint in OK Lang Vic met Joey de Leon and they eventually formed the legendary TVJ (Tito, Vic, and Joey). Aside from the gag show, Vic also joined VST & Company, producing hit songs like "Rock Baby Rock" and "Awitin Mo at Isasayaw Ko."

Fast-forward to the present.

Little did Jose Manalo know that TVJ's Eat Bulaga would be the biggest career boost for him when people started enjoying his antics behind the scenes as Production Assistant. Jose became Vic's new sidekick in comedy, following Bossing in TV shows like Daddy Di Do Du and the movies Enteng Kabisote and Ispiritista. Jose and Bossing instantly clicked with their audiences and the duo continues to give them full-bellied entertainment every lunch time.