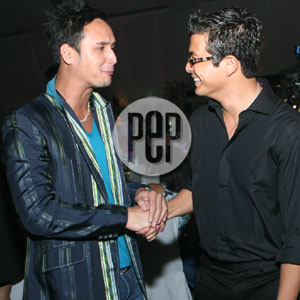 A wave or a handshake may be a simple gesture to some, but for John Estrada (right) and Jericho Rosales, it became a symbol of truce.

It was July of last year when actor John Estrada got involved in a controversy brought allegedly by some snide remarks he uttered to young actress Heart Evangelista in a bar somewhere in Makati.

That incident never became public, up until John and Heart's boyfriend, actor Jericho Rosales, bumped into each other during the celebrity screening of Hollywood film, Superman Returns, at the IMAX Theater in Mall of Asia.

Upon seeing John, Jericho's protective nature automatically went into high gear. Ignoring the public's privy eyes, Jericho confronted John in a serious man-to-man talk that, according to spectators, threatened to turn physical if not immediately doused off. Accounts given by those present, mostly showbiz reporters and photographers said that the two were close to hitting each other until Gary Valenciano stepped in to calm down the arguing parties.

She also shrugged off talks that the two were on the verge of slugging it out and that Gary's intervention was only to remind them that people might misinterpret their stern discussion.

THE ROOT. At the center of the conflict was Jericho's girlfriend, Heart Evangelista.

A few weeks after the John-Jericho controversy, Heart faced the entertainment press to say her piece:

"I was with my sister and some friends at that time [in a bar in Makati] when I saw John was also there. I said hello and I told him, ‘I saw you at the Victory,' the church where Echo and I go. Then we chatted for about 10 minutes, but I wasn't drunk. I just had my second bottle of mineral water.

"All of a sudden he said something that I think was not appropriate and I was offended. I just kept quiet and stormed out of the bar and called my driver to fetch me. While going home, I called up Echo and told him about what happened," was Heart's narrative.

KEEPING MUM. Heart made it clear that such would be the only statement she would give about the incident.

Echo, the actor's nickname, also refused to talk about it in length after his girlfriend gave her side of the story.

Same with John Estrada, who never gave his side of the story.

KISS AND MAKE UP. Barely a year after the row, John and Jericho's path would cross again this time at the 7th anniversary party of YES! magazine and the launch of Philippine Entertainment Portal (PEP) held last February 28, 2007, at the NBC Tent, The Fort in Taguig City.

Entertainment columnist and manager Ethel Ramos, who also attended the event, narrated that John was seated at her table (with celebrity couple Aga Muhlach and Charlene Gonzales) when Jericho and Heart arrived.

The lovebirds, according to Manay Ethel, dropped by to say hello. When Jericho saw John, the former approached the latter—and without hesitation—Jericho extended his hand for a firm handshake. John, who also smilingly waved back to say hi to Heart, gladly reciprocated Echo's effort.

Through actions and without saying much, the three parties buried the hatchet without fanfare.

Later, John happily relayed to the press that he was deeply touched by Echo's gesture.