Angel Aquino has no hangups about boyfriend younger than her 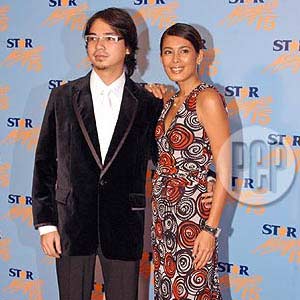 Angel Aguino's relationship with Lui Villaluz, who is five years younger than her, is evolving. She finds him "very mature for his age... he's very responsible."

In the Us Girls presscon held last week, PEP (Philippine Entertainment Portal) asked Angel Aquino about her relationship with Lui Villaluz, co-host of the now defunct Magandang Umaga Pilipinas. Angel revealed that they have been going out for the past eight months.

"Si Lui I've known him for a long time. Lagi ko siyang nakakabangga dito sa ABS-CBN and I've always been fond of him. I felt na he was a good guy so parang may natural fondness lang, but I never really saw him as somebody I can fall in love with," started Angel.

"Then I told him na I feel so bad kasi gusto ko pang i-work out. Break na kami noon ng boyfriend ko pero parang I still wanted to get back together and work it out pero when I saw him [ex-boyfriend] again, parang alam ko na hindi na talaga magwo-work ‘yon.

"Until nga medyo nanliligaw-ligaw na siya. In January, we got together na, formally."

YOUNGER MAN. Angel admitted that she was hesitant at first to say yes.

She added, "Pero nagkakataon lang na the ones who are very interesting are the young men who approach me. ‘Yong mga older ones kasi parang maangas ang dating sa akin. Itong mga ito they are very easy to talk to.

"Pero si Lui is the most different among the young men that I met kasi he's very mature for his age. Parang he's ahead of his age, e. Tapos he's very responsible. He looks after himself. He doesn't depend on anyone for anything."

DAUGHTERS. Angel is raising two daughters, 14 and 12, from her previous marriage—which was annulled in 2004. She said that she is slowly introducing Lui to her children.

"So I asked them. Sabi nung anak ko, ‘Mommy, he's too young!' Sabi ko, ‘I know, but what do you think? I really like him.' Sabi niya, ‘Well Mommy, if he can take care of you kahit na mas bata siya sa ‘yo then sige go for it.'

"You know, they're very supportive naman. No pressure from their part na, ‘Mommy kailangan close kami agad ni Tito Lui.' Alam nila na that's something you build on along the way, di ba? So sana if Lui and I are meant to stay together, sana ‘yong relationship din nila will be good."

Angel also revealed that she hasn't gone out yet with Lui and the kids together.

"Ako and the kids or Ako and Lui. Not all together yet because si Lui also is trying to find his footing pa rin. This is something new to him. He has never gone out, I guess, with a girl who has kids, who has been married before. So these are things that he's trying to come to terms with also," she explained.

TEENAGER. At 34, Angel still looks the same way as she was first seen in her debut film Mumbaki. She explained that although some moms would think that raising a teenage daughter ages them, she thinks otherwise.

"Kasi ‘yong relationship ko with them, para kaming barkada," she said. "Wala naman [problema] with my fourteen-year-old. Although ngayon nagtatampo na siya. Dati hindi iyang nagtatampo whenever I disappoint her, like when I don't make it on time."