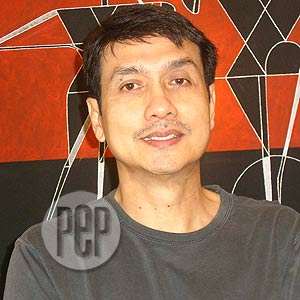 Orestes Ojeda, local showbiz's former premier sexy-serious actor, diverted his attention from movies to selling art pieces. Since then, he never looked back.

It is rare to find an actor who combines sensuality with substance in the depth and intensity of his performances. One fine example is Orestes Ojeda.

Orestes-Luis Pagalilauan in real life-was only 20-years-old when he was persuaded by the late director and good family friend Joey Gosengfiao to join show business. He was formally introduced as a supporting actor in Ariel Oreta's Zoom Zoom Superman in 1974.

"I just tried it. Sa akin naman, parang laro-laro lang kasi nag-aaral pa ko no'n, and I was a basketball varsity player kaya I was more focused towards that goal," fondly recalled Orestes in a casual interview over snack with Philippine Entertainment Portal (PEP).

As it turned out, Orestes gravitated towards the camera, rather than going professional on the hard court. Showbiz became a full-time career for the Philippine School of Business Administration alumnus.

He was known then as a sexy-yet-serious actor and the fact that he possessed both the physique and sensitivity seldom found in other actors during the time paid reaped great dividends for his career.

Aside from working with some of the best film directors, Orestes also had the chance to brandish his acting chops together with Amalia Fuentes, Celia Rodriguez, Gina Pareno, Barbara Perez, Helen Gamboa, Ma. Isabel Lopez, and Lorna Tolentino.

But perhaps Orestes's biggest break happened in 1985 when he was cast alongside Anna Marie Gutierrez and Daniel Fernando for Peque Gallaga's masterpiece, Scorpio Nights.

CHANGING FIELDS. Unlike other actors, Orestes was wise enough to know that fame, as well as the job itself, is fleeting.

Since the ‘80s, he was already a great fan of the other arts-most notably, painting-and that simple adulation of the medium eventually blossomed into a full-time hobby.

Orestes's passion for painting made him an ardent student of its various forms and types—and interestingly—even its authenticity. His knowledge ultimately equipped him to make a living out of it, not as a painter, but as a businessman through auctions and trade. Consequently, this passion diverted his attention away from the silhouette world, and he chose instead to appear only sporadically on screen.

He clarified though he didn't change route in a conscious effort for material gain.

TRANQUIL EXISTENCE. At present, the premier sexy actor of the ‘80s is living a serene and comfortable life away from showbiz's helter-skelter, which perfectly suits Orestes' quiet and reserved nature.

"I love being an actor but I'm not the type who [would] really go out and chat with the press or the reporters, kaya hindi din ako kilala nung iba. Tahimik kasi ako, and I don't usually engage sa mga showbiz functions. Not that I have anything against it, wala lang talaga sa nature ko."

But, for all the changes in his life, would he still be much open to possible offers from producers?

"Kung meron and ok naman, why not?" Orestes simply answered with a smile.

The last movie he appeared in was Aubrey Miles's horror flick Sanib in 2003. Prior to that, he was also seen in Vilma Santos's Dekada '70 and Regal Entertainment's Mano Po 2.

One good thing about his situation now is that he can afford to slow down, relax, and enjoy the fruits of his labor, while still keeping his options unwrapped.

"I don't want to stress my life too much, to the point na hindi mo na nakikita and nai-enjoy most the things that truly matter," Orestes, who also dabbles in meditation and sports, reasoned.

"It's nice to strive to have a comfortable life, but for me, hindi naman dapat ‘yon ang maging focus. You still have to make sure na balance lang lahat. Sa dulo, wala din naman lahat ng materyal na bagay."