Gretchen Malalad to Bong Alvarez: "See you in court." 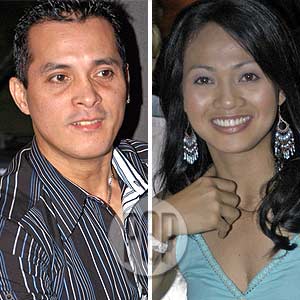 Bong Alvarez (left) has offered Gretchen Malalad a left-handed apology, but the lady reporter intends to pursue the physical injuries charges that she filed against the former professional basketball player.

Gretchen Malalad has accepted the apology of Bong Alvarez but intends to pursue the case of physical injuries that she filed against the former professional basketball player who attacked her recently.

In an interview with The Buzz earlier today, August 26, the ABS-CBN reporter recalled the violent behavior displayed by Bong while she was trying to talk with Wilfredo Cabanlit, the taxi driver who complained of being mauled by the former cager.

The Buzz showed the footage of Bong caught in the act of elbowing Gretchen in her face. "Pag ganyan niya sa akin, reaction ko nun, I was expecting another blow from him so tumaas na akong ganun [she puts up her hands in defense], so nagbato na ko [ng punch]," recalled Gretchen. "Pag ganun ko, bumalik na naman siya. Sinapak niya ako, at naalala ko masakit dito [pointing to her forehead and face]."

Bong told the press that he explicitly asked the lady reporter not to take videos of him that day, August 21.

The former Pinoy Big Brother Celebrity Edition housemate pointed out that she was simply doing her job as a reporter for the Kapamilya Network. "I wasn't provoking him. I asked him kung pwedeng makuha 'yung side niya kasi we heard the side of the victim," explained Gretchen. "Bakit mo ginawa sa akin 'yun, e, I was just doing my job. Of course, he hit me, hindi lang isa...dalawa, tatlo ‘ata. I was hurt and [had] to protect myself as well."

The 2005 Southeast Asian Games karate gold medalist defended herself from Bong's attacks by blocking his punches and hitting him in the face.

"Babae akong tao and as a martial arts artist, we are taught that we do not do the first strike ever. You hit back as a means of defending yourself. I was defending myself. I hit back dahil pinoprotektahan ko lang ang sarili ko," she declared.