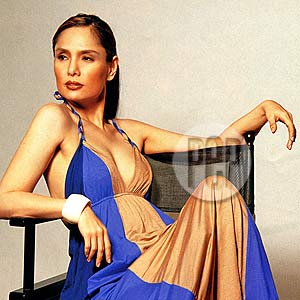 "Compared to how my lifestyle was before na feeling lifestyle of the rich and famous, ang layo talaga ng difference," confides Snooky Serna. The actress revealed that she's currently going through a tough time, brought about by depression and financial crisis.

Actress Snooky Serna bravely confessed that she's currently leading a life that is far from glamorous.

"Compared to how my lifestyle was before na feeling lifestyle of the rich and famous, ang layo talaga ng difference," confided Snooky to Showbiz Central host Pia Guanio in an interview aired yesterday, August 26.

Snooky was once considered as one of local tinseltown's most bankable actresses, but her finances and stature took a nosedive over the years. Her once rosy lifestyle changed drastically.

"I'm living a very simple life now, a very humble life. We live in a small condominium unit, two bedrooms. But you know, I have nothing to complain about because, thank God, at least we still have a roof over our heads. Pero ‘yon nga, malayo talaga kung iku-compare mo sa noon na feeling milyonarya."

Generous to a fault, Snooky admitted that her recklessness with money now haunts her.

"Meron kasi akong tendency na maging very trusting of people and there was a point in time of my life, kasalanan ko rin e, na even when I was in my mid-20s, supposedly at that age, di ba, adult ka na? You're in your sound mind and element and you have the right to make your own choices. But I chose to be very soft-hearted to a fault na masyado akong galante when I had money—give, give, give, give, give—parang wala nang bukas. Parang ganun, I lived my life like a one-day millionaire but now you realized that it's not the way it should be," she recalled while holding back tears.

The actress, however, defended her mother Mila Ocampo against accusations that one major reason Snooky is now in dire straits was entirely because of her mom's inconsiderate spending habits during the time they were living comfortably.

"My Mom is not perfect, so am I, and so is everyone here. I mean with all due respect, wala namang perpektong tao sa atin. But it's not solely her fault. I mean, open book naman 'yon sa showbiz na my Mom got into gambling, nagka-casino siya before. But it's not entirely her fault.

"Hindi sa pagyayabang ha, we had millions and millions of money before and hindi naman niya ‘yon kayang ubusin on her own. But it was also because I was really sobrang magastos din talaga. I really did not know the value of hard work and money."

She mentioned her two daughters, Sachi and Samantha, whom she had with former husband, actor Ricardo Cepeda."Nakakaiyak sila kasi they're very flexible. They're very matured for their age."

She added, "Minsan ako 'yung nagbi-breakdown lalo na pag nakikita ko na wala kaming ilaw. Siyempre, there were moments napuputulan kami ng ilaw. There were moments talagang hirap na hirap kami. Awang-awa ako sa mga anak ko and I keep on saying sorry to them. I cried to them and you know what they say? Totoo ito walang showbiz... Sabi ng panganay ko, pati nung maliit, ‘Mom we understand. We understand what you're going through and it's not entirely your fault. And even 'yung separation n'yo ni dad it takes two to tango mom.' Although they love their dad so much, he's a good provider, he's a good man."

INDECENT PROPOSALS. The question of receiving indecent proposals was also touched during the interview.

The former popular child star never hid the fact that such offers came her way once in a while. The thought of accepting never escaped her mind but Snooky proudly said that she never gave in, no matter how tempting the offer.

BATTLING HER DEMONS. Snooky's attitude, both personally and professionally, had become a constant issue and even a butt of jokes inside the industry throughout the years.

"If you have faith in God, why do you have to take medications?" said Snooky on why she delayed seeking proper medical help to alleviate her worsening depression.

Snooky's chronic manic-depression destroyed her feeling of self-worth and made her flee the marriage. She even admitted coming close several times to suicide to escape all the emotional pain.

Getting over the denial stage regarding her psychological condition combined with her new-found faith in God, Snooky said that the dark cloud hovering above her head is slowly fading, although her financial crisis continues.

"I'm [now] taking my medications properly in the right perspective, kumbaga tuluy-tuloy na... there's light after every dark tunnel that you go through," she ended on a positive note.