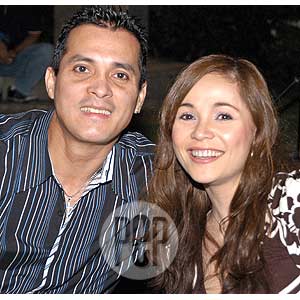 "Bong, this has to stop because we have growing kids we have three girls. This has to stop," Almira Muhlach pleaded with her husband Bong Alvarez, who often gets into trouble.

On the heels of a wayward husband comes the suffering wife.

To start with, Almira admitted that her marriage with the ex-cager was indeed going through tough times, although things were doing relatively well for a month until the alleged mauling incident took place. When Almira saw the footage of Bong in the precinct, surrounded by policemen and reporters, she confided that at that exact moment she just lost it.

"Oh no, what is this again? 'Yung napapanood ko na lang 'yung nasa kabilang channel na pagkasama-sama na ng asawa ko. Sabi ko, 'Ano 'yan? What's happening?' So I had to rush to go to him to know kung ano 'yung story. Kasi nung kausap ko siya, ang alam ko lang istorya is about the taxi driver. I didn't know na meron na palang isa pang incident," she added, referring to her husband's tiff this time with ABS-CBN reporter Gretchen Malalad after she attempted to get the side of the cab driver.

NATURALLY CALM. This is not the first time that Bong got involved in a controversy that has to do with assault allegedly brought about by his volatile temper. Almira openly acknowledged her husband's tendency to gravitate towards trouble. However, she insisted that Bong wouldn't hurt anyone, especially a woman, out of the blue.

She then proceeded to defend her husband against accusations of physical violence: "Alam mo si Bong, brusko lang siya as in maski sa basketball kilala siya with his built and everything. Pero with hurting Gretchen, I don't think so, Pia."

ALMOST GIVING UP. "Honestly, totoo nagkakaproblema kami. Matagal na kaming nagkakaproblema ni Bong. There was this time na talagang feeling ko I wanted to give up already," Almira opened up, her voice cracking a bit.

When Pia asked why she thought of giving up on the marriage for a time, the former actress simply said, "I can't take the life that I have right now."

Fortunately, Almira assessed her plans and decided to stick to the marriage thus keeping the family intact.

The thwarted split-up has nothing to do with reports of Bong being violent, alcoholic, and unfaithful. No such things come into play according to Almira.

BONDED IN TROUBLE. "We are not on the rocks. I'm here to stand by his side," affirmed Almira without blinking.

Despite the setback, Almira refused to be swayed from her commitment of sustaining the marriage and continuing what they had started before the mauling controversy erupted.