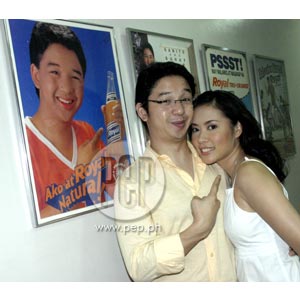 Despite his hectic schedule, RJ Ledesma will be getting married on March 2008 to former Penshoppe model Vanessa Pastor.

It was almost 20 years ago when ‘Joey' would burst into our television sets in a Royal Tru Orange (RTO) commercial. He was being egged on by his friends to introduce himself to 'Jenny.'

And that gulp, glug, and chug would lead to a series of RTO commercials and many opportunities ahead.

Twenty years later, Rene "RJ" Ledesma Jr. has kept himself busy with so many ventures and work that you could hardly believe he still has time for his fiancé Vanessa Pastor.

RJ told Philippine Entertainment Portal (PEP) that working on the series of Royal Tru Orange commercials enabled him to work with some of the leading film directors, namely, Lino Brocka, Ishmael Bernal, Peque Gallaga, and Jun Urbano. It was Lino who first directed him in that momentous commercial.

RJ is proud of the fact that the RTO commercials that originally aired after the first EDSA Revolution have embedded themselves in Filipino pop culture history. He says he can already second-guess the age of a person when they glance at him and ask his name.

"People sometimes give me a second look and try to figure out where they remember me from," RJ said.

He says he gets those bewildered stares wherever he goes these days.

Since the last RTO commercial rolled, RJ's involvement with television was on GMA-7's Teen Talk with Bea Lucero-Lhuillier, from 1993 to 1995.

RJ took a break from showbiz when he decided to enter the corporate world. He became the brand manager of Ivory Soap and Shampoo for Procter & Gamble (P&G).

RJ recounted with laughter: "The funny anecdote over there is the fact that before, Jun Urbano used to direct [me in] my commercial. But then when I moved to be the brand manager of a product, I hired his services to direct commercials. So, it's kinda paikot lang yung mundo."

In 1999, RJ left P&G to help in his family's real estate business, which developed Taal View Heights. He is currently the chief operating officer and executive vice-president of the company.

But television beckoned once again, and RJ took the opportunity to work at the news and public affairs division of ABS-CBN. He hosted Alas Singko Y Medya Weekend Edition with Mon Ilagan and Cheryl Cosim.

"I was doing that for a couple of months but then I was happily accepted into the Massachusetts Institute of Techonology in the U.S. to [take up] a Master's degree in Real Estate Development. That was in 2000. Then, I came back in 2001 to help in the family business," he said.

A lot of their clients right now are Filipinos who are abroad, mostly from Italy, Japan, Australia, and the United States.

"There is a strong market right now. Mostly, what we are getting are retirees from the 40s to the mid-50s, who want to retire, semi-retire here in the Philippines...those who want to come and live here."

But there were still offers for him to do television work. He did the weekend edition of Magandang Umaga, Bayan for almost two years.

By 2004, RJ was doing two television shows. One was Tahanang Pinoy shown on ABC-5 on Sunday mornings, and the other was The Men's Room with stand-up comic Tim Tayag on late-night Wednesdays on Studio 23.

RJ shares that he enjoyed a lot of things with the late-night show, "It was a spontaneous, no-holds barred, whatever-came-to-our-mind show. On the side, I was a professional events host, hosting corporate events, weddings, and different things.

"It was quite an experience as executive producer and be host as well," he said, adding that the show got into trouble with the ratings board and he had to meet up with MTRCB (Movie and Television Review and Classification Board) Chairperson Consoliza Laguardia. The show lasted for about a year and a half.

Despite his busy schedule, RJ still finds time to sit down and write a humor column for the Philippine Star, called "Pogi from a Parallel Universe." It is published every Wednesday and talks about issues confronting Filipino men. He also oversees a men's magazine where his humorous views are reflected in its pages.

Asked to compare writing and editing, he admits enjoying both. "In a column, your voice is reverberating. Your voice is distilled in the magazine."

RJ used to teach Ashtanga Yoga but now he is content to maintain the lifestyle of a yoga practitioner.

As for his future projects, RJ is coming out with a book this December, a compilation of his weekly column, titled "Lies My Yaya Should Have Told Me." He is also currently taping for an upcoming reality show called Expat, wherein 14 contestants will compete for a job in a U.S.-based company. It will air this November on Studio 23.

"It's been a busy couple of years after show business," he deadpans.

Asked if the RTO commercials helped him get girls, he recalls, "No. I was very much a geek in high school. I was more of a studious type of a guy. And that's how I also managed my college as well. I was studious but I was also doing a lot of extra-curricular activities."

He excitedly shares that he has found love in spite the hectic pace of life, "Thank God, I finally found someone willing to marry me this coming March," smiles the 33-year old executive.