Sexy ladies and their rise to stardom 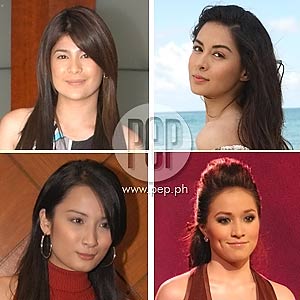 From top left, clockwise: A few months after their sexy pictorials, Roxanne Guinoo, Marian Rivera, Cristine Reyes, and Ehra Madrigal have become the most visible young stars on television.

Wide-eyed wonder. Eyebrows raised. A moment of disbelief. But we smile and nod approvingly in the end. This is how she hits our eye—the young talent now grown all-woman, glowing with confidence and sex appeal.

The allure is not just about posing in a swimsuit. It's not only about being the cover girl of men's magazines, fueling men's fantasies of the perfect bedmate. It's the added X-factor that eludes words yet says everything about a sexy star. How successfully can she carry that X-factor to become a sex goddess? How far will "It" carry her to become an icon in the competitive world of showbiz?

Philippine Entertainment Portal (PEP) lists the young celebrities who made our heads turn this year when they posed sexy for the camera. They were mere bit players in the beginning, just part of showbiz's list of pretty faces. But after showing some skin and exuding their sensuality, they merited not just a second glance, but public adulation as well. They're all under age 25 and we expect their careers to shine brighter in the coming years.

9. Wendy Valdez. Her 126 days inside Pinoy Big Brother's house turned her into the talk of the town. Her morena beauty and gorgeous body made us second-guess that she could go big in showbiz, just like former PBB housemates Sam Milby and Bianca Gonzales. Although she was evicted early from Bahay ni Kuya, she was sent back through text voting because she's got the spunk and the sex appeal. She attracted a lot of publicity after she got upset with her female housemates for nominating her for eviction. Thus, she earned the title, "most hated housemate."

At the end of the competition, she finished third. More things came up for the 25-year old former Bb. Pilipinas 2005 candidate. She was actually the first housemate of Season 2 who was given a big break. She bagged the title role of Margarita. Though the drama lasted only one season, we might be seeing more of her in the next couple of months. She may be the "most hated," but most guys would disagree and say she's the "most sexy."

8. Riza Santos. Former Ms. Earth-Canada became the darling of the press during the Miss Earth contest held here last November 2006. The press adored her, and so she won Miss Photogenic in the contest. Not only that, she was a true-blue Pinay and Pinoys had wished to see more of her.

Fast forward a year later: Riza is back in the country, hoping to make it big in the world of local showbiz. She graced the cover of FHM last October. Admittedly conservative, the 20-year old Riza didn't have any hangups about posing for the famous men's magazine. She said it was just like modeling in a swimsuit and lounging in a chair.

Currently inside the Pinoy Big Brother Celebrity Edition 2, she carries herself with the poise of a beauty queen, of course. Before entering the house, she shot a cameo in the Aga Mulach-Anne Curtis starrer, Waiting for Love. Now we're waiting for her to show her dancing and singing skills.

7. Michelle Madrigal. Four years ago, Michelle was part of ABS-CBN's artista teen search Star Circle Quest Teen QuestSeason 1. She went only as far as being part of the Magic Circle of 10. Afterwards, she did guestings and stints on a couple of TV series in ABS-CBN shows like Bora: Sons of the Beach, Vietnam Rose, Star Magic Presents, and Komiks. She also did some movies: D'Anothers, I Wanna Be Happy, and Mano Po 5.

A month after she turned 19, she agreed to have her first sexy pictorial with Maxim for its December 2006 issue. With her sweet face and a personality oozing with sensuality, she was simply irresistible. During the early part of 2007, she was included in the sineserye May Minamahal.

September became a hot month for the male species because Michelle conquered the news stands again with her daring photos on the pages of FHM magazine. This time, the sweet-faced girl transformed into a sultry vamp.

The daughter of former sexy actress Karla Kahlua is currently single, and says that building her career is her top priority. She is part of the cast of Resiklo, Imus Productions's entry to 2007 Metro Manila Film Festival.

6. Iwa Moto. We Pinoys just can't get enough of chinita beauty and Iwa fits that mold to a T. Iwa is the product of the GMA-7 reality search, StarStruck Season 3. She was 1st runner-up in the contest. After that, we started seeing her on SOP Gigsters, Love to Love, and Nuts Entertainment.

But she was forced to take a break from showbiz for six weeks when disciplinary action was meted on her and StarStruck Ultimate Survivor Jackie Rice. When she returned, she was a changed person.

And on the cover of FHM's December 2006, Iwa had proven that there are a lot more fascinating things about this chinita beauty than her being a mere pasaway girl. Beautiful skin, a pair of chinky eyes, confidence, and candidness—all in one package. Iwa's spontaneity makes her an interesting character in real life.

From her "suspended" status, she's now one of GMA-7's fast-rising character actresses. The 19-year old Filipino-Japanese is currently seen on three shows at the Kapuso Network: Nuts Entertainment, Zaido, and Kung Mahawi Man ang Ulap. It's in the afternoon drama show that she gets praises for her kontrabida role. She is initially cast in two movies slated for 2008.

5. Maja Salvador. Maja comes from a long line of actors and actresses. Her father Ross Rival, aunt Jobelle Salvador, and uncle Philip Salvador are some of her relatives who stepped into the showbiz limelight.

In 2001, she began her journey in showbiz with appearances in Maalaala Mo Kaya, It Might Be You, Sa Piling Mo, Spirits, and various seasons of Love Spell. Maja had a supporting role in the thriller Sukob and was cast as one of the leads in the teen movie First Day High.

It was this year that people took notice of the total-star package of the young actress. She was given recognition as "Most Promising Female Star" by the Guillermo Mendoza Scholarship Foundation, Inc., "New Movie Actress of the Year" by PMPC Star Awards, and "Breakthrough Performance of the Year" by the Golden Screen Awards.

Early this year, large billboards for a clothing brand that sprung up all over the Metro made people wonder and take a second look at the young actress. The "virginal" look was replaced by a sexy vixen. She's got a face that the camera loves and eyes that tantalize.

People also noticed her when she walked the ramp of the clothing line's fashion show, wearing a green midriff blouse, skinny jeans and golden pumps.

The big break came when she was cast in the lead of Regal Entertainment's My Kuya's Wedding (August 2007) with Ryan Agoncillo. Since then, she became one of the most visible Kapamilya stars.

The Dance Floor Princess is part of the "Ultimate Dance 4" of the Sunday afternoon show ASAP, one of the three lead roles in prime time show Pangarap na Bituin, and will soon star in the sineserye Patayin Mo sa Sindak si Barbara with Susan Roces and Kris Aquino. Maja will also play the lead in the Julie Vega starrer Anna Liza, which is set for production next year.

4. Ehra Madrigal. An admittedly quiet and conservative girl makes this list. The eldest of the two Madrigal sisters in showbiz, Ehra kept a relatively low profile when she joined showbiz in 2004 via Mulawin. She was also in other GMA-7 hit shows, Encantadia, Kung Mamahalin Mo Lang Ako, Love to Love, and Majika.

In September 2006, Ehra modeled in two-piece bikini and lingerie for FHM. In her interview with the magazine, she said, "Baka nga ito na yung sign na hinihintay ko to boost my career." And, slowly but surely, she did get attention.

Afterwards, Ehra was included in Shake Rattle and Roll 8, shown in December last year. Early in 2007 she was added to the comedy show Nuts Entertainment and cast as sexy sidekick Brigette Maisog to Richard Gutierrez in Lupin.

Finally last August, 22-year-old Ehra signed a two-year exclusive deal which guarantees that she'll do three shows for the Kapuso network. She will be seen again with Richard Gutierrez in Kamandag. She was also signed up by Tanduay as its new image model and endorser, after Katrina Halili.

Indeed, shy girl has finally come out of her shell. The guys give her a loud cheer!

3. Roxanne Guinoo. Roxanne was part of the 2004 ABS-CBN reality talent search, Star Circle Quest (SCQ), eventually becoming part of the Magic Circle of 5. She was teamed up with fellow SCQ contestant, Joross Gamboa, and went on to do Gulong ng Palad, At Home Ka Dito and other Kapamilya shows.

When 2007 entered, a billboard of a new White Castle girl rose up along Epifanio de los Santos Ave (EDSA). The woman in the famous red bikini was none other than Roxanne. From a demure and conservative image, Roxanne continued to show off her mature, sexy image by posing for a men's magazine.

Soon more offers started pouring in for Roxanne. From an afternoon show Wowowee, where she became a co-host, she moved to the afternoon spot via the sineserye Natutulog ba ang Diyos, then found a place in the primetime block as the leading lady of Vhong Navarro in Lastikman. She's also filming for Regal's Shake Rattle and Roll 9 and is slated to join the cast of Palos, a new TV series for 2008.

2. Cristine Reyes. Television audiences got to know her first as part of the first StarStruck season in 2003. She exited early in the competition but many expected her to go big. She played the waiting game, toiling in supporting roles in the TV series Mulawin, Darna, Captain Barbell,and Super Twins. The girl sings and dances as well in live shows of the Kapuso network SOP Gigsters and SOP.

Everyone is anticipating her launching movie, Green Paradise. She is getting more plum roles at the Kapuso network's shows, like Marimar and the upcoming Joaquin Bordado. Cristine is also giving fellow StarStruck alumna Katrina Halili a healthy dose of competition for FHM's Sexiest List. Expect the competition to heat up come 2008.

Her big break came last June when she was chosen by network executives to play the role of Marimar. They were impressed when Marian came to the audition in a bikini and gyrated like the original Marimar, played by Mexican singer-actress Thalia.

With the overwhelming success of Marimar, the 23-year old actress continues to reap more laurels. She has done magazine covers. Companies are lining up to get her as endorser. She also has two movies for the Metro Manila Film Festival, Bahay Kubo with Maricel Soriano, and Desperadas with Ruffa Gutierrez, Iza Calzado and Rufa Mae Quinto. Another Thalia telenovela is set for a remake by GMA-7 and they are again eyeing Marian to take on the title role in Rosalinda. Should this follow-up show thrive, expect the gorgeous Marian to be crowned as GMA-7's new primetime queen.

Way ahead of these young ladies, a lot of stars—Sunshine Cruz, Ara Mina, Assunta de Rossi, Francine Prieto, Diana Zubiri, Angel Locsin, Katrina Halili, among others—had also taken the "sexy" route to stardom. So, if you have it, flaunt it!