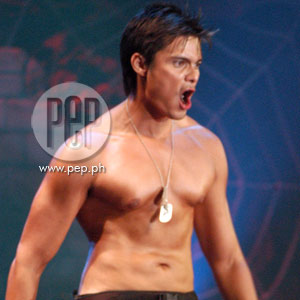 Dingdong Dantes (in photo) catapulted to fame this year through his role as Sergio Santibañez in the TV series Marimar. For this reason, he was chosen to grace the cover of Cosmo Men, the special supplement accompanying the September issue of Cosmopolitan.

The sexiness of an actor is not only based on his looks but also on his acting ability, stage presence, and self-confidence. An actor can be considered sexy if he has these three elements: face, body, and sex appeal—all contributing to the total package.

The hunks are attractive not only physically but also mentally and emotionally. They have the "It" factor that makes women go "Ooh!" and "Aah!" These men exude a certain confidence that marks the way they talk, walk, and interact with others.

In today's world, it has been proven time and again that sex sells. And being sexy can be a ticket to the big time, which is why a lot of commercial and ramp models cross over from the world of fashion to the world of showbiz.

Philippine Entertainment Portal (PEP) draws its list of the sexiest hunks for 2007, in alphabetical order:

Marvin Agustin. This actor-businessman has the energy and the stamina to manage several food establishments, fulfill his showbiz commitments, and take care of his two young sons, Santiago and Sebastian. Marvin is seen every night on GMA-7's Marimar, where he plays the charming Rodolfo Sta. Ginez. He competes with Sergio (Dingdong Dantes) for the affections of Bella/Marimar (Marian Rivera).

From being the cute partner of Jolina Magdangal, he is now one of showbiz's sexiest bachelors. Marvin knows that staying fit should be his top priority so that he can juggle all these responsibilities.

In June 2007, the character actor proudly showed his muscles and six-pack abs on the cover of Men's Health magazine.

Jon Avila. The "English Stallion" is presently one of the celebrity housemates in Pinoy Big Brother Celebrity Edition 2 and is also part of Star Magic Batch 15.

This Fil-Irish model-turned-actor is Jonathan dela Cruz Mullally in real life. He used to weigh 200 lbs but the call of the limelight inspired him to trim down to 175 lbs. Luckily for his fans, Jon did not think twice in leaving his position as account manager in England to pursue an acting career in the Philippines. He can be seen 24/7 inside Big Brother's house. And of course, you won't miss his sexy billboard and posters in Bench stores.

Jake Cuenca. Jake Cuenca received the loudest shrieks and screams from his fans when he attended the Be Bench grand finals earlier this year. Clad only in green briefs, the TV actor-model showed off his well-defined torso and even posed provocatively to excite the crowd even more. He topbilled ABS-CBN's Natutulog Ba ang Diyos opposite his current flame Roxanne Guinoo. He is now part of the fantaserye Lastikman.

Dingdong Dantes. The Philippine version of Sergio Santibañez made a daring pictorial for Cosmopolitan magazine where he agreed to be photographed in his birthday suit. The sensual Dingdong Dantes led the celebrity centerfolds during the Cosmo Bachelor Bash last September 6. A topless Dingdong stormed through the catwalk, causing the crowd to scream their lungs out.

In an interview, Dingdong revealed, "I lost 28 lbs. for Marimar...I liked what I saw." Fans of the actor agree—they sure like what they see.

The viewing public saw him transformed from cute, chubby kid in Kambal Tuko to a lean teenager in Click, from a muscled guy in Captain Barbell to a fashionably fit character in Lupin.

Richard points out that even though two months have passed since his crime-fiction series Lupin ended, he still follows a regular physical regimen to maintain his physique and endurance. Watch for his TV comeback soon!

Luis Manzano. Being the son of popular celebrities Edu Manzano and Vilma Santos, Luis is blessed with good genes as well as the discipline to maintain what nature has given him.

This ASAP '07 co-host shared his workout wisdom with Men's Health magazine in its May 2007 issue. Luis is very comfortable with his body, as proven by his Cosmo pictorial where his private parts were covered by a wall and his butt exposed in the movie Ang Cute ng Ina Mo. Aside from his physical attributes, Luis is known for his gift of gab and a sense of humor that rivals that of his father. This makes him one lucky and hunky personality to watch.

Zanjoe Marudo. This moreno model-turned-actor is out to prove that he can do well in the drama and comedy genres. Zanjoe Marudo entered public consciousness when he became part of the first season of Pinoy Big Brother Celebrity Edition. Tall, dark, and handsome, Zanjoe's comic skills were honed in the show Aalog-alog before he broke into movies via the Toni Gonzaga-Sam Milby starrer You Got Me.

With a six-pack to die for and a towering six-foot frame, this Bench underwear model will soon show off his dramatic skills in the thriller Altar.

Derek Ramsey. Derek Ramsey can be seen every night on ABS-CBN's Ysabella where he plays the buff chef Mito. The dusky actor is one of Cosmo magazine's 2007 celebrity centerfolds and it's not hard to see why he was chosen. His good muscle tone and chiseled face give him this manly look.

Derek keeps himself fit by engaging in ultimate frisbee. In fact, he was supposed to fly to Brazil as part of the Philippine frisbee team that will compete in the Ultimate Frisbee Competition.

Dennis Trillo. As a Pulis Pangkalawakan, Dennis Trillo dons a skin-tight body suit for the TV series Zaido but he takes it all in stride. The mild-mannered actor exudes a quiet persona but he is considered one of tinseltown's hottest bachelors. In fact, two women being linked to Dennis reportedly confronted each other during a taping for a TV show.

Even though we've seen him dress up as a lady twice already—in the movie Aishite Imasu and Unico Hijo, the Lenten offering of GMA-7—Dennis is definitely all-man.

Alfred Vargas. Yet another Cosmo celebrity centerfold makes it to PEP's list of sexiest hunks. Alfred Vargas's hotness factor is expected to rise this cold December when he appears on the big screen as a member of a SWAT (Special Weapons and Tactics) team.

Viewers of Banal, his Metro Manila Film Fest entry, can look forward to Alfred's big guns and his even bigger physique. In fact, after his rigorous training, he was given a certificate proving that Alfred is now an honorary member of the Makati SWAT Team. In times of danger, wouldn't it be great to have this hunk by your side?

There you have them. If you have names to add, the space below is all yours.