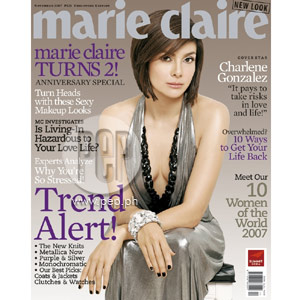 After six years of marriage to Aga Muhlach, the multi-faceted Charlene Gonzalez (in photo) proves that she is her own person.


Viewers who have watched Charlene Gonzalez host ABC-5's Eezy Dancing and ABS-CBN's Keep On Dancing would probably think she's been dancing all her life. But Charlene herself confesses in the November 2007 issue of Marie Claire, "When I first started, whatever I did, I didn't know how to do it. For example, dancing—I didn't know how to dance at all."

Through hard work and determination, she was able to improve her dancing skills, earning the title, "Dance Empress." Charlene's diligence extends to all her other endeavors, especially hosting ABS-CBN's now defunct lifestyle show, At Home Ka Dito.

The show ended last August after being on the air for almost seven years. Charlene says, "We had a pretty long run. I wanted to take a break until the end of this year, then go back to work in 2008. As of now, I'm just relaxing. This is my first break from work, ever, and it's nice."

While Charlene takes a break, Aga's career accelerates: Aside from his weekly sitcom That's My Doc, there's his upcoming movie with Anne Curtis, Waiting for Your Love. Aga's latest project for the big screen, A Love Story, paired Aga with Angelica Panganiban and Maricel Soriano.

Charlene narrates that in preparation for Aga's role as a man torn between his wife and his mistress, he took up a strict diet and physical regimen. He lost more than 60 lbs. On her husband's fit physique, Charlene gushes, "I love it, I love it, I love it! He looks so great, di ba? I remember waking up one day and seeing him shirtless. ‘May abs ka na? Where did those come from?'"

Read more about Charlene, her hubby Aga, and their five-year old twins Andres and Atasha. Get your copy of the November issue of Marie Claire magazine. Also featuring the 10 amazing Women of the World awardees, Marie Claire is available in all leading bookstores and magazine stands at P125 per copy.