What did Carlene Aguilar whisper to Cristine Reyes? 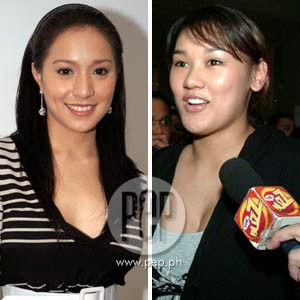 In what should have been a typical taping day for the GMA-7 game show K! The All-Star Videoke Challenge last Wednesday, November 7, an encounter between two lovely ladies turned out to be a controversial event in showbiz this past week.

In today's StarTalk, November 10, eyewitnesses gave an account of what transpired between the two women—Carlene Aguilar and Cristine Reyes— who are linked only through matinee idol Dennis Trillo.

Carlene had dropped by Broadway Centrum, the venue of the taping for the videoke-singing game show. She brought a gift for her friend Jenny Miller, who was an episode contestant for All-Star K.

But Carlene lingered in the studio, even though she had to rush to the concert of Beyonce that evening. Eyewitnesses told StarTalk that Carlene had been staring at Cristine Reyes while the beauty queen was talking on the phone. Carlene then approached a StarTalk staff member to help her introduce herself to Cristine. But sensing possible tension, the staff member declined Carlene's request.

Carlene went on to tell about her relationship with Dennis. According to Carlene, it was Popoy Caritativo, the manager of Dennis, who decided that the former beauty queen should to go to the U.S. to give birth and to protect the career of Dennis. While in the U.S., she thought that she and Dennis were still a couple.

When reports reached the former beauty queen that Dennis was being linked to the young actress, she confronted Dennis. The Zaido star denied any involvement with Cristine and promised to fix things with Carlene as soon as she returned to the country.

The staff of the game show repeatedly asked Carlene to leave the Broadway studio. Meanwhile, other staff members of the game show had already whisked Cristine away to the director's booth. But Cristine left the booth after a few minutes. People heard the young actress say that she didn't need to avoid anyone because she didn't do anything wrong.

Jenny Miller was escorting her friend out of the studio. But on the way out, Carlene saw Cristine, who was sitting in the make-up area of the studio.

Suddenly, Carlene left the side of Jenny and went straight for Cristine. Staff members who had already surrounded Cristine were swept aside. Eyewitnesses say that Carlene grabbed and twisted Cristine's arm.

Jenny quickly pulled her friend away from Cristin, but Carlene came back towards the young actress and whispered something that really upset Cristine.

As Carlene went out of the studio, she turned to a StarTalk staff and teased, "Alam mo ba kung ano ibinulong ko sa kanya?"

"Hindi ka mahal ni Dennis." And Carlene added that Dennis was just after the physical aspect of the relationship with Cristine.

StarTalk tried to get the side of Dennis. They're still waiting for the matinee idol or his manager to respond. Meanwhile, Cristine's sister, actress Ara Mina, told StarTalk that she is waiting for the camp of Dennis to say something before she gives her own reaction to the incident.