PEP's memorable encounters with the stars! 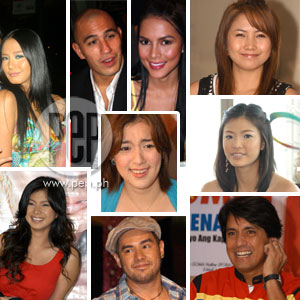 Life is full of stories, but some of the most memorable and worth telling are those that don't quite go the way we want. Indeed, routine work turns into little dramas by unexpected twists of fate. So read on and enjoy these bloopers, er, stories!

Showbiz fans like ourselves cherish the moment when we meet our favorite stars. Hobnobbing with the people of Tinseltown makes us all giddy. What's the perfect meet-and-greet scenario? What do I tell him/ her? Do I get starstruck?

Things don't always go according to plan though. Fate sometimes has a knack of making things a bit more interesting, catching us off guard at the final moment. The unexpected occurs, making that moment truly memorable, whether we like it or not. Take some stories of the PEP staff, for example. What could have been a simple meet-and-greet story turned into amusing experiences worth sharing.

One day, my editor assigned me to cover PEP's win-a-date promo with Katrina Halili. My job was to interview Katrina and her date. It may sound easy to some people, but for me, it was like jumping off a 34-story building. You see, it was my first-ever interview with a celebrity, so I prayed that I would look confident and pretend not to be a huge fan of hers.

Anyway, the moment arrived when I had to interview Katrina and her date. The one with Allan Mendoza, Katrina's date, would go smoothly, I thought. "Astig! Madali lang pala ‘to. Hehe!"

When my turn came to interview Katrina, I suddenly went numb. She was staring directly into my eyes, as if attempting to hypnotize me! I found myself stuttering and pointing my recorder towards somebody else. Good thing, no one noticed my blunder. I was able to recover immediately and carried on with the mission like a good soldier.

Now that's only one story out of many more.

During the YES! Anniversary and PEP Launch party, I was a bit nervous because I had never seen an event so star-studded. I was tasked to usher in the celebrities that night. Then, the most embarrassing moment came, with Gabby Eigenmann. After telling me his table number, I looked for it as fast as I could. The table numbers were not arranged chronologically so I had a hard time. He seemed to have noticed that I was kinda clueless. He said, "Alam mo ba talaga kung saan yung table na yun? Ang gulo kasi di ba?" I just smiled at him and pretended to know what I was doing.

I am not a photographer by profession. But since I love taking pictures, PEP would sometimes send me to presscons.

My most unforgettable experience with a celebrity is a bit embarrassing.

When I clicked my camera, ayaw mag-flash. I tried again, ayaw ulit.

I had to muster my courage before admitting to the ladies, "Sorry, for some reason, ayaw mag-flash." I felt my face going red with embarrassment. I said to myself I wasted their time. But they said, "Okay lang." Hay, buti na lang.

Brandon Vera puts one over me
Bong Godinez, Part-time writer

When I visited the set of Kamandag last week, I got the chance to interview Brandon Vera, UFC fighter and Richard Gutierrez's fight instructor. He's an American-born guy with a Filipino-Italian descent, so I asked him which language would he prefer—English or Filipino? He said, "English." So I talked to him in English.

When I asked my first question, he answered me in Tagalog. I asked him another one, he answered again in Tagalog. Confusion must have been clearly written all over my face, so he said to me, "Nalilito ka ‘no?" Then we laughed. "Biro lang Bong, you can ask me in straight Tagalog."

It was the presscon of Kamandag. After the presentation at around 8:30 p.m., the press in attendance went around interviewing the cast members. My editor was there, too, trying to field me for an interview with one of the stars, kasi may mga contributors din. "Kanya-kanya na iyan."

I took on Jewel Mische. She was first interviewed by the television shows. Then, it was on with the writers. She was answering the typical questions related to the TV series.

PEP contributor Rose Garcia wanted to ask her about the Peeping Toms "Borrower" blind item, but Rose was hesitant because she was the one who wrote it. I told her, "Gamitan ko ng charms ko."

I got the chance to go near her, but I had to do pasakalye muna, so I asked other questions. Other writers did the same.

It was 9:50 when finally, I fired away the question. "We have a blind item, and PEPsters answered ‘Jewel Mische' as the person who borrows stuff. Is it true?"

I thought she would say "no comment," but she was actually thankful that somebody brought that up so she could clarify things.

After that, I told our editor, "We have an exclusive!"

The first time I interviewed Angel Locsin was for the movie Mulawin (December 2005). I chatted with her briefly after the premiere of her movie with Richard Gutierrez.

Fast forward to February 2007. Angel and Richard were once again paired for a Valentine movie titled The Promise. I approached Angel and introduced myself. But it proved to be unnecessary. She told me, "Yes, I remember. Di ba straight ang hair mo dati?" I was floored. I wasn't expecting a super busy star like her to remember our first encounter—and even recall my hairstyle then! I was impressed that Angel could remember personal details like that—a trait that endears stars to the press even more.

What do you do when in the wee hours of the morning, your mobile phone rings and you hear the voice of Ara Mina? That is one hell of a fantasy for most men.

While I was snoring in deep sleep, my mobile phone rang. Right off, I thought something happened to my sister who was at the hospital at that time.

Anyway, when I finally managed to find my phone and answer it, I got the shock of my life! The voice on the other line introduced herself as Ara Mina.

Since Ara's number was not in my phone book, I thought it was just a prank call. But since the voice on the other line sounded like music to my ears, I was convinced that it was really Ara.

She first told me how she got my number, and then went on to explain why she called me at that unholy hour.

According to Ara, a friend called her attention about some of the comments posted in an article on PEP. It was about her denial of the rumored affair with boxing champ Manny Pacquiao.

She was obviously upset, but she was very nice when she asked if I can do something about the insulting comments made by some pasaway PEPsters. She said that it might also upset her mom, who was sick that time, if ever she laid eyes on them. I told her I would do my best.

Before hanging up the phone, she was kind enough to tell me to save her SUN number. I did.

Now fully awake, I immediately went downstairs and turned on my computer to moderate the comments on her article.

Then, I went back to bed with a big smile on my face. Did I just have a sweet dream?

It was my first time to be seated beside Richard Gomez. He just announced his decision to run for senator, so I thought I'd make that our conversation piece. The man, aside from being so handsome, was also candid and passionate about the topic. "Sandali, scoop ‘to."

So I told Richard, "Can I just get my pen and paper?"

It became a Q&A session. I would ask a question. He would answer. I would write down his statements.

On my third question, I noticed he was talking slower. And then he said, following the stroke of my pen, "Write this, it doesn't matter if I run inde--pen--dent or not. It--is--about... Wait, kulang, you forgot the ‘is.'"

I chuckled and said, "Sorry ha, I don't have my recorder with me."

After the interview, I spent a few more minutes with him, double-checking the words I wrote. "Hindi ko maintindihan kasi handwriting ko..."

He smiled and reviewed my notes.

If Richard had been lucky in his senatorial bid, I'm pretty sure he would never hire me as his personal secretary.