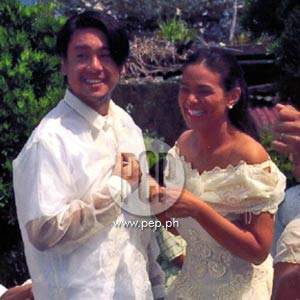 
When Iza Calzado first met her Taiwanese leading man Ken Zhu, she didn't know how to approach him. The two are paired together for the Ignite Media and GMA Films movie Batanes, which will open in theaters nationwide starting December 5.

The Filipina actress narrated during the Batanes press con last night, November 13: "Si Ken noong unang dating niya, kinakabahan kami lahat because we don't know what it's like to work with a Taiwanese actor. And not just any Taiwanese actor but I have to say, a superstar—at least in Asia, di ba?

It was later revealed that Ken is familiar with the martial art tai chi, which can be used to hurt as well as heal people.

Iza points out that despite his superstar status, the F4 member is very down-to-earth.

"Nalaman ko na sobra niyang grounded. Ang dami kasi niyang pinagdaanan. He didn't start out rich. He comes from humble beginnings. I was so amazed kasi we had this one scene, kakakain lang namin ng lunch and he had to eat so much again for the scene. Yung noodles malamig pa. Kung ako 'yon, ipapainit ko pa, siya hindi.

"I told him, ‘Do you want to spit it out?' kasi tapos na yung take. Sabi niya, ‘No. I've learned in life because I once went a couple of days without food. From that day on, I said I will never waste food.'

"Ang laki ng impact sa akin yung [fact na] isang superstar would not waste food that he could just buy with a snap of his fingers. Meron siyang mga prinsipyo—that says a lot about a man," says Iza, who plays the character of Pam in the 90-minute movie. Ken plays the role of Kao, a Taiwanese fisherman who gets stranded in Batanes.

Aside from praising Ken for his humility, Iza also commended her co-star for his professionalism.

While shooting the film in the northernmost province of the archipelago, Ken whiled away the time by singing songs for the cast and crew, prompting Iza to dub him as a jukebox.

When asked if Iza had a crush on the F4 in the past, she candidly replied, "Hindi ako. Sinabi ko sa kanya 'yon. Basta may sinabi ako sa kanya, nag-apologize ako for something.

Ken is part of the phenomenal boy band that gained popularity for their shows Meteor Garden and Meteor Rain. The multi-lingual Taiwanese actor speaks not only Mandarin but also English, Cantonese, Singlish, and a bit of Thai, Indonesian, and Japanese.