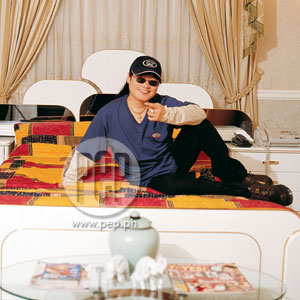 April "Boy" Regino has a house that many see as his trophy as a singer. But more than a trophy, the house is concrete proof of his victory over a market that often welcomes only tall, handsome, socially smooth types who may or may not have talent. April Boy knows he started with so much less. "Sa simula't simula," he says, "buong buhay ko alam naman ng mga tao. Galing sa hirap, squatter, batang-riles ng Caloocan. Hindi ko basta matatalik

When YES! called Paril Boy for the exact location of his Marikina home, he wanted to simplify things for us: "Ipagtanong n'yo lang, alam ng lahat." He wasn't bragging either. Residents in the area knew where for sure and were happy to be of service.


Truth is, this man's house has enough presence even on busy Del Pilar Street to announce itself on its own. Not every residence on a modest 180 square meters, after all, will dare be so immodest as to combine peach, green, and beige on the facade of a steep three-story edifice in a street overrun by jeepneys. "Maliit kasi ang lote. Pinatodo ko na," says the Jukebox King—estimated record sales: 120,000 to 200,000 units per album—of his P10 million-plus property.


Of course, these days the Marikina house is just one of his many investments. He also owns real estate in Antipolo, Binangonan, and Tagaytay; operates a "pang-masa" bar-and-restaurant on EDSA in Mandaluyong—the April "Boy" Regino Entertainment Center, said to enjoy strong patronage; and drives around in a Mark III.


This man, dismissed by the upper and middle classes as "baduy," "bakya," and "corny," is making big money and obviously managing it well. And while he's still not likely to win the vote for most good-looking or even most talented singer in a country brimming with those, he is one guy with a lot more going for him. Ask anyone in the know: This 5'3" singing sensation is the proud owner of a mighty good heart.