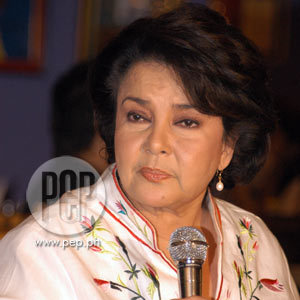 Amalia Fuentes firmly said that she intends to return the documents she got from her husband's office. "I have no intention of selling the certificates. What I don't need, I will return. That is not a robbery," she explains.

Stevens reportedly filed a complaint for robbery, as represented by his corporate secretary Editha Bernardo Lopez, against Amalia at the Quezon City Police District-Criminal Investigatigation and Detection Unit.

Amalia is being accused with five other persons who allegedly helped her in getting the cash and other important documents.

Investigations showed that Amalia was with a certain Jeric Stevens, SPO3 Rodel Tuano, one Edmar Ramirez of 24/7 Locksmith and Safe Vault Services, and two unidentified persons when she was allowed to enter the establishment. These men allegedly helped her in opening the main door of the office and stealing the documents contained inside the vaults.

AMALIA'S DEFENSE. Through a text message, People's Journal was able to get the side of the veteran actress. Amalia's message read, "I can't answer until I see what he [Stevens] filed, you are the first one I hear this. Last night we were both in Manila Polo Club. So let me read his case first, I will ask my lawyer to get a copy of the case."

In the following phone interview, Amalia said in her defense that she merely picked up personal papers. She was in a hurry, the actress said, so she picked up a stack of documents, with the intention of returning them later.

Amalia clarified, "I only picked up personal papers from Joey's secretary. I didn't barge in. I had the key to the office of Joey. Technically we're still husband and wife. Whatever is in his name is still considered conjugal.

"I have no intention of selling the certificates. What I don't need, I will return. That is not a robbery."

The veteran actress further explained that she and Joey are still technically husband and wife, that they still own the said conjugal property. Amalia added, "A husband cannot sue his wife for theft."

During the interview, Amalia said that Joey stopped giving her P100,000 monthly support. She has also filed a temporary protection order against her husband before the QC court.