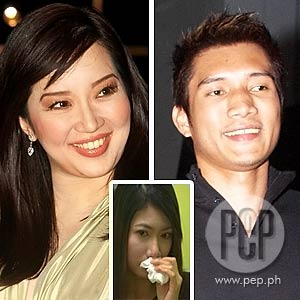 It pays to be first.

In the highly competitive world of showbiz news reporting, nothing beats the high of coming up with first-hand information that stuns the public.

In its one year of existence, PEP (Philippine Entertainment Portal), has already churned out a number of big exclusive news that shook the world of showbiz. Making a list looks easy, but truth is, coming up with a scoop is no easy feat, considering the number of reporters and media vying to deliver a hot item straight from the oven 24/7.

But that's the challenge everyone lives through in a dizzying industry like show business. And it's a challenge PEP has faced head on since its inception.

We look back on some of the big exclusives delivered by PEP—news that started, stirred and provoked not just the entertainment scene, but the general public as well.

THE FACE BEHIND THE NAME. It was a scandal that opened 2007, with Startalk's co-host Lolit Solis on the front line.

For all the heat of that controversy, only the name of the supposed third party was known to the public. Curiosity ran high—"What does she really look like and how come James fell for her despite being married to a celebrity as big as Kris Aquino?"

It was on February 24, 2007 that PEP, in anticipation of Hope's taped appearance the following day, carried the headline: "Hope Centeno shows her face in an exclusive interview with S-Files."

With plain windows as backdrop, a young, attractive woman could be seen posing gracefully before a camera with her friends. She wore a plain white blouse and had shoulder-length hair. The photo caption stated that she was the elusive Hope Centeno.

The triangle now had its third face.

How was it done?

PEP Associate Editor Erwin Santiago cited his breakthrough research, which was done in coordination with the right source. He culled the photo from Friendster, and it was identified by one of the contributors.

The article itself was a revelation. To the question, what was the most memorable moment Hope shared with James, she replied, after pausing for a few seconds: "When we make love."

Fortunately, James and Kris were able to withstand the storm and are now living a relatively quiet life while continuing with their respective careers. As for Hope? Well, no one has heard anything about her since the issue died a natural death. But the attention generated by her confession will surely stick as one of the most controversial issues in local show business for 2007.

TWO SCOOPS IN ONE DAY. On November 23, 2006, PEP published an article written by contributor Alex Brosas about a statement allegedly muttered by Dawn Zulueta, labeling Gretchen Barretto as a prima donna.

Coincidentally, YES! magazine was conducting a photo shoot with Gretchen on the same day the article was uploaded. Recognizing an opportunity, YES! and PEP Editor-in-Chief Jo-Ann Maglipon read the news to Gretchen, who gamely agreed to answer the allegation.

It was the kind of verbal exchange that would prick up the ears of showbiz enthusiasts. Tabloids, broadsheets, and showbiz talk shows immediately pciked up the issue and became a hot topic for several months.

SNUB AND MAKE UP. It all started with an article written by PEP contributor Nora Calderon. According to the write-up, Gretchen Barretto allegedly ignored Bong Revilla's presence during an event. There were rumors in the past linking the two, of course, and the alleged snub heightened the talk.

The story got bigger, and several write-ups sprung up left and right. Incidentally, Lani's manager Lolit Solis got entangled with the issue when she angrily commented on Gretchen's statement, questioning the stability of Bong and Lani's marital life.

Alarmed by the escalating word war, a PEP source revealed that Gretchen's long-time partner, Tonyboy Cojuangco talked to Lolit and asked the talent manager to stop the assault. Lolit agreed on one condition: She'd keep her mouth shout provided Gretchen would also keep hers zipped.

CINDERELLA FINISH. Even while in the middle of a party, PEP still finds itself working seriously to deliver a hot scoop.

On February 28, 2007, while the PEP team was at the NBC Tent for the YES! anniversary party and PEP launch, an info was relayed saying that Kris Aquino was rushed to the Makati Medical Hospital for "complications due to pregnancy."

The loquacious TV host was then seven months pregnant, courtesy of cager- husband James Yap. Shaken by the alleged James-Hope Centeno affair, Kris was understandably going through a lot of emotional stress during that period.

PEP Managing Editor Karen Pagsolingan recounted how the staff labored on the story in an article she wrote on April 14:

"While the party was going on at the NBC Tent, we received the feed, wrote the draft—and then found we couldn't upload it because we didn't have one detail. Which hospital? It was close to midnight when a source from www.gmanews.tv called to say: ‘She's in Makati Med.' At 12:10 a.m., PEP activated the story."

The doctors immediately ruled Kris's situation as a case of false labor and pronounced their patient out of danger. Barely two months after the scare, Kris gave birth to James Jr. on April 19, 2007, at exactly 4:50 p.m., in the same Makati Medical Center where she had been rushed before.

STALKING A ROYALTY. Despite KC Concepcion's reluctance to be viewed as a celebrity, the daughter of Megastar Sharon Cuneta and former matinee idol, Gabby Concepcion, simply cannot escape the roaming eyes of the press.

And that includes PEP.

The Sunday afternoon before Christmas Day 2006, former PEP staff writer and now YES! senior staff writer Candice Lim was tipped off that KC and rumored boyfriend, Lino Cayetano, were together at Sonya's Garden in Tagaytay City.

The info turned out to be accurate so PEP uploaded the article, "KC Concepcion and Lino Cayetano—just friends or dating?" on December 26, much to the delight of the rumormongers who quickly feasted on the story.

The second scoop turned out to be more daring. Another info was received by PEP claiming that KC and Lino were spotted in Boracay. PEP, this time, answered the hanging question it initially raised two weeks before. "PEP Exclusive: KC and Lino now an item!" read the headline on January 8, 2007.

Instantly, the news became a hot commodity with news program 24 Oras picking up the story in its evening telecast. The story went all the way to the newspapers and countless blogs.

To this date, KC and Lino are tight-lipped about their relationship, although some sources claim that the two are indeed playing sweet music together. The most recent sighting of the celebrated yet low-profile couple was during the concert of Beyonce Knowles last November 7 at The Fort in Taguig.

WHO'S YOUR DADDY? Without denials, or statements like "not true," "we're just friends," or "no comment," showbiz will not be called showbiz. Our lingo even has an idiom for the habit of evasion—"showbiz ka ba?"

When former Bb. Pilipinas-World 2006 Carlene Aguilar left the country for the United States, word quickly went around that she was pregnant and that her boyfriend Dennis was the father. Weeks before her departure, she was spotted in a mall apparently shopping for maternity clothes.

The enigmatic young actor consistently downplayed the rumor every time he was interviewed. By coincidence, GMA-7's Lhar Santiago bumped into a heavily pregnant Carlene in Los Angeles, California. The rumor turned out to be true after all.

Back home, Dennis was starting to feel the heat, and during the launching of his debut album on March 12, 2007, he said his piece about the issue: "Hindi ko alam. Hindi ko sure. Hindi ko alam, ayoko lang magsalita."

Dennis remained adamant and even sounded certain that he had nothing to do with the ex-beauty queen's pregnancy. "If it's true that Carlene is pregnant, the baby is not mine," he sternly told a PEP source.

Finally, a reliable PEP source positively pointed at Dennis as the father. PEP posted the article, "Dennis Trillo is the father of Carlene Aguilar's baby—PEP source," on September 27, 2007 at exactly 7:56 pm. That same week, the Zaido lead actor confirmed that the claim of the PEP source was true.

Yup, Camille Prats, the sweet-faced child star who captivated the collective hearts of the Pinoy viewers, is on her way to parenthood. Was it only like yesterday when we eagerly embraced her as our Princess Sarah?

Camille is currently in the US awaiting her date with the stork while studying through a home schooling program.

MORE TO COME. And the exciting mission continues.

Let's make it clear, however, that we post the stories tagged "PEP Exclusive" or "First Read on PEP" not merely for the thrill of it. Our reasons are simple: to inform the public and to keep the PEPsters updated.

Showbiz may be fun and glamorous for most people. But for all the glitter, it is still serious work for the people whose job is to deliver fresh news, and to validate the legitimacy of the scoops. We know that speed is crucial in this game, but accuracy is even more important. Our job is to do both.