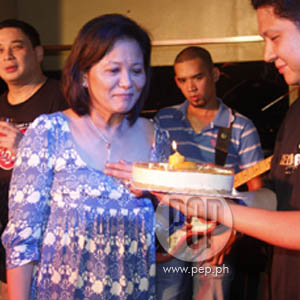 TAPE Inc.'s SVP and COO Malou Choa-Fagar prepares to blow the candle of her birthday cake during her party last night, November 14.


One of showbiz industry's most well-loved personalities, Malou Choa-Fagar—SVP and COO of TAPE Inc. which produces Eat Bulaga!—celebrated her 52nd birthday last night, November 14, at the Penthouse of Imperial Palace Suites in Quezon City. It was the same venue where her 51st birthday party was held last year.

PEP (Philippine Entertainment Portal) was there again, of course, to witness the celebration. Most of the celebrities we saw at Malou's birthday party last year were also present this year.

We shared the elevator ride with Roselle Monteverde-Teo, Direk Boots Plata, and Tirso Cruz III going up to the Penthouse of Imperial Palace Suites.

Although Julia Clarete was the last to arrive, she set the evening on fire despite the rain as she rendered rock songs to the delight of everyone.

Before her, those who jammed with the band were Pip, Ian, Ricky, Pauleen, Prince, Gina, and Pia who gamely obliged to the crowd's "heckling." Even PEP Managing Editor Karen Pagsolingan joined the fun, singing her favorite disco ditty, "Dancing Queen."

Malou, wearing a blue and white frock Dorothy Perkins, also took the stage with a "heartfelt" rendition of her favorite song, Dina Bonnevie's "Bakit Ba Ganyan?" According to some members of the Wednesday Group, the birthday girl had been singing that song for the last three birthday parties.

Aside from the music, food and booze made Malou's birthday party a total blast!