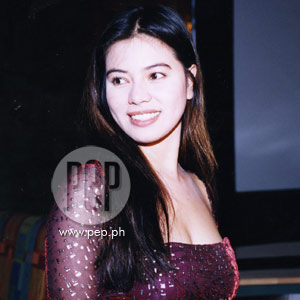 After her last movie, Klaudia decided to take an indefinite leave from show business and pursue her dreams as Milfa Dacula, her real name. It was not an easy decision. Her mom and siblings didn't approve of her exit from showbiz, fearing the loss of her financial support. In school, people looked down on her, making nasty remarks about her being merely "a bold star." But she turned the negative comments into a challenge by finishing her computer science course at the New Era University in Quezon City.

Klaudia once had a boyfriend from Bulacan who wanted to marry her. But he did not want her to do the movie Toro. They broke up. She made a trip to Germany and when she returned, he wanted to reconcile. They tried to work out their relationship but it fell through finally.

ONLINE COURTSHIP. It was in a taped interview with Showbiz Central last Sunday, November 18, that Klaudia shared the present, hopeful phase of her life. She found a new love via cyberspace.

For all that,—meeting a mysterious suitor on the Net highway—the former sexy actress confessed she's not a big fan of online love affairs.

The lucky guy is Andy Zahamg, an Information Tehnology consultant by profession. When Klaudia first saw her Chinese suitor in person, she was not impressed.

Nonetheless, Klaudia and Andy started out as good friends before they decided to take their platonic relationship to the next level.

AROUND THE WORLD. Andy spoiled his girlfriend by sending her off to different countries. For someone who grew up in poverty and experienced discrimination because of her sexy image, the jetsetting routine was a dream come true. But the appeal of high living eventually wore off. Klaudia began to crave for intimacy, as expected in a relationship. The distance between them and Andy's demanding work schedule tested her patience.

LOVE IS HARD WORK. While Klaudia wanted a breakup, Andy did his best to win Klaudia back. They are now working extremely hard to manage their unconventional arrangement while squeezing in talks of marriage.

"It's hard but I think we managed it pretty well," explained Andy to Showbiz Central. "It's hard but it's been working out well for us. She not only has a beautiful appearance, also a beautiful heart. She's gonna make a very good wife."

For Klaudia, all the sacrifices are worth it, as long as she and Andy remain committed to make the relationship work.

Apparently touched by Klaudia's heartfelt promise and expectation, Andy could only utter: "We love each other, let's get married."