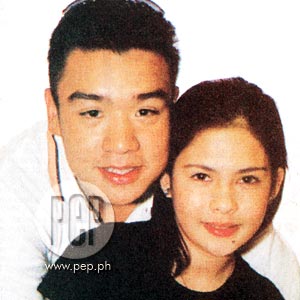 Boy2 Quizon, Dolphy's grandson and best friend of Vandolph Quizon, received that call on his cellphone past 4:35 on the afternoon of November 19, 2001.

The phone rang again and Boy2 was able to recognize the voice as Allan Araza, Vandolph's driver. Allan relayed that they were in Pangasinan. Then the line went dead.

The Accident. Earlier, Vandolph took over the control of the Ford F-150 from his driver at the Binaloan gasoline station. They had taken a pit stop to fill up the tank of the pickup.

Vandolph's pickup was passing through the national highway at breakneck speed. The pickup was going so fast that it created a dust storm from a dirt strip as far as 200 meters back. Suddenly the northbound pickup swerved to overtake an Aniceto passenger bus. It had no proper clearance. An oncoming southbound Isuzu Elf truck was nearly halfway past the Aniceto bus. The Ford pickup collided with the truck. Both vehicles were a total wreck

The collision occurred near an auto repair shop where Maximiano Ramirez, a Pozorubio resident who worked as mechanic for 17 years, witnessed everything.

Desireé ‘Ishi' Raquiza, was the first to be removed from the F-150. Arthur Menrige, an electrician, pulled her out. He found her in a fetal position, her arms and legs folded and pressed against her chest. He thinks Ishi may have been munching a snack when the crash happened. There were two packets of Chippy, one sealed and one half-empty. Menrige got the help of a woman motorist, who stopped and offered to drive Ishi to the hospital.

Vandolph's driver Allan, who was seated on the right side of the pickup, managed to limp away.

Meanwhile, Ramirez took steel bars and a chain. He attached the chain to a Nissan belonging to his neighbor and began dragging the crushed door of the F-150. He saw Vandolph unconscious, trapped under bent sheets of metal. Directly behind him, in the back row, was Vandolph's bodyguard, Rowell Biong.

Ronie Ulpindo, the driver of the six-wheeler truck, was pinned to the driver's seat. The two people whom witnessess saw thrown off from the back of the truck were Jeferson Ulpindo, Ronie's younger brother, and Manny Eulalio. A fourth passenger in the Elf was Grace Cabado, a checker for Mega Farm, the company where the four were employed. All three passengers escaped with minor injuries and managed to walk away from the accident on their own.

Getting to Pangasinan. Back in Manila, the family of Vandolph was alarmed.

Jeffrey Quizon kept calling Vandolph's cellphone until a woman picked it up. "We were not able to get her name at all but we were thankful kasi siya ang nagsabi ng details at kung makakapagpadala na ng helicopter para kunin sina Vandolph at si Ishi dahil delikado na raw ang lagay," he said.

The family did not know how to tell the Quizon patriarch. It was ZsaZsa Padilla, Dolphy's partner, who would tell him the news.

The young Quizons' request to have a helicopter fly that night had been turned down by network ABS-CBN and the Armed Forces of the Philippines. Parañaque City Mayor Joey Marquez, Alma Moreno's ex-husband, also made an appeal to have a helicopter available. He went to Villamor Air Base, determined to get a chopper despite the prohibition on night flights. A colonel on the job saved the day for him. Joey paid in cash for the rental of a JAKA helicopter.

Dolphy rushed to Villamor Air Base in Parañaque, with ZsaZsa. He got to the air base in time to stop the helicopter from flying. The ride lasted under an hour and the three were silent all throughout.

By Their Side. When they got to the Urdaneta Sacred Heart Hospital, they found Vandolph occupying a third bed next to Ishi. Vandolph lay unconscious and had minor abrasions. There was no external bleeding.

When Vandolph was brought earlier to the hospital, he had deep wounds in the skull and behind the right ear. He also had fractures in several places in the right arm and right leg, as well as fractures in the left thigh.

Ishi, too, was unconscious. Hospital records showed that her pupils were dilated and nonreactive. And because she was having seizures when she was admitted, she was brought to the intensive care unit.

During the stay of Dolphy and ZsaZsa at the hospital, ZsaZsa at one point said, "Mabuti pa, Daddy, na dalhin na natin sa Manila kasi doon kumpleto ang mga gamit." But the attending doctors explained that the kids, especially Ishi, could not be airlifted just yet. Vandolph had major blood loss and the staff had to stabilize his blood pressure.

As soon as Vandolph's condition stabilized, Dolphy and ZsaZsa were given the go-signal to for the airlift. An ambulance took them to Urdaneta National High School were the chopper had been waiting. It was already close to 11 in the evening.

"Supposed to be hindi na makakasakay si Dolphy kasi masikip ‘yung helicopter," Nurse Tablada recalls. Dolphy was persistent, even if ZsaZsa prodded him to travel by land instead.

Vandolph was brought to the Makati Medical Center. Eight hours after arriving at the hospital, Vandolph would have a 14-and-a-half hour operation involving eight specialists.

Last Goodbye to Ishi. ZsaZsa stayed behind at the Urdaneta Sacred Heart Hospital to look after Ishi, who had been confined for some three hours. She would be transported to the Trauma Medical Specialist Group in Dagupan City, an hour's drive away. The next morning, Ishi was airlifted by a helicopter paid for by Dolphy.to Makati Medical Center.

On the evening of December 4—16 days after the accident—Ishi was gone.

Ishi was buried in a simple but emotional Jehovah's Witness burial rite on the morning of December 9. Friends and classmates from Colegio de San Agustin came in white. They carried white and pink balloons, which they released as she was lowered to the ground. Pink was the favorite color of Ishi.

Ishi's grandmother thanked everyone and acknowledged Vandolph's relatives. With ultimate grace, she said to them, "For all that you've done, you've taken away the guilt from anyone."