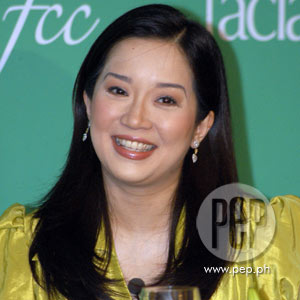 Companies who want to reinforce the image of their brand or convert their advertising campaigns into product sales often leverage on star power. The mass appeal of the celebrities is so effective that almost all TV commercials, print ads, billboards, and glass-cased giant posters in malls feature them. Even politicians ride on the popularity of our idols to win over Pinoy voters.

The year 2007 marks celebrity advertising as never before—their famous faces have launched millions of purchases for health, nutrition, and beauty products. The overarching message: “You, too, can enjoy the Good Life.”

Philippine Entertainment Portal (PEP) lists down today’s top endorsers. It was an arduous attempt, determining the rank of the celebrities according to the quantity and impact of their advertising campaigns. Who endorsed the most number of brands? Who was the most effective in the market? Who made instant recall with the consumers?

In the end, ranking the incomparables is best left to corporate statisticians—and to all you PEPsters out there.

Dawn recently made the move back to Manila after her husband Anton Lagdameo won as Davao's representative in the May 2007 elections. Her move to the country’s capital, coupled with the birth of their son Jacobo, paved the way for her return to showbiz.

After the controversial TV commercial with Pantene last year, she became the face of Myra 400-E. “Blooming kasi siya ngayon,” said the tagline of her ad.

Companies bank on her appeal as a woman in her prime. She’s an award-winning actress, a devoted wife and mom, a philanthropist, a beautiful 38-year-old woman; in short, her image is faultless. The lady who was discovered via a Close-up commercial is considered endorsement royalty.

Her beauty and candidness endeared her to advertisers, and also to customers. She’s a good choice for Olay. “We got her because perfect si Gretchen…because she fits the target market age wanted na mature women na maganda pa rin,” Cirio told PEP.

Despite the “Kisscandal” that rattled her last July, her beauty was unfazed. Her testimonial campaign, with her face devoid of make-up, had the ladies rushing to supermarkets.

And talks have it that her most recent Internet photos are for a shampoo commercial.

Now, who doesn’t want to look like La Greta?

Another actress who made her presence felt in the advertising arena this year is Ruffa Gutierrez.

With her decision to make Manila her permanent residence, endorsements began knocking on her door. Ruffa and her adorable daughters Lorin and Venice graced the Nido commercial. Her “independent woman” image was flagged by her ad campaigns for Pantene and Avon Fashions. Her fresh beauty became visible on billboards along EDSA.

How did she easily regain the momentum? Publicity and visibility.

Advertisers believe in the formula of associating theirs brands to a popular celebrity. Seeing Ruffa on The Buzz every Sunday would mean recall and, sometimes, casual plugs.

The daughter of Megastar Sharon Cuneta is on track to inheriting her mom’s endorsement queen title.

KC has never been absent from the showbiz limelight despite making Paris her home for the past years. She has made the public conscious of her presence with numerous ads—from Human to ph Care to Palmolive.

Fresh from France, KC buckled down to work by joining the ladies of Bayo, which had Leah Salonga, Kitchie Nadal, Barbie Almabis, to name a few, as previous brand ambassadors. She’s a good representation of the brand’s Pinoy and proud tag.

Her charm also works well with the young adult market—she’s a perfect mix of beauty, brains, and breeding!

Piolo is a force to reckon in terms of his appeal to both men and women. He is a good representation of the yuppies, or young professionals. This is perhaps the reason why the new entrant San Mig Coffee didn’t have a hard time penetrating the market, why Bench added him to its list of Famous group, why Timex has clung to him for the past few years, why Centrum got him.

Either way, the heartthrob can elicit an “I love you Piolooooooooo!” from ladies anytime.

She was visible on the primetime block of the Kapuso network for the past three years. She was loved by the young market. Therefore, it was good strategy for teen-skewed brands to get her as their endorser.

Even if she was dogged by a controversial decision midway of the year, her presence was still felt in the boob tube’s commercial spots.

Clients believe that she’s the female counterpart of Piolo in the world of yuppies. The two were “commercial” partners. Centrum, Timex, and San Mig coffee featured both of them.

And with their upcoming team-up in a TV series, there’s a chance the tandem will still shine in the commercial world.

Judy Ann Santos’s untarnished and sexier image attracted a lot of endorsements this year. Her appeal went beyond the commercial arena—even politicians used her masa appeal. As proof, some political analysts claimed that she helped Senator Jamby Madrigal win a Senate seat in 2004.

Majority of the Pinoys can relate to Juday because of her Cinderella characters on TV. Copywriters take advantage of this, so that most of her commercials are in Tagalog, very down-to-earth, and at one point, madrama. Just pay attention to her Tuseran, Angel Condensada, and Pride TV commercials.

Is she going to be the next Sharon Cuneta of the advertisers? We have a hunch she will be.

Sharon Cuneta has been a staple in the TV ads, and we’re talking of big brands here—from Lux soap to Coke to Selecta to Alaska to Eskinol to Sara Lee, among others. Before she made family her priority, almost every brand would want to ink a deal with her. Many advertising executives and brand managers said that her mega appeal is effective.

This year—despite getting busy with the campaign of her husband Senator Kiko Pangilinan, her studies, and her daughters—she continues to wave her magic wand on some brands. She currently has Lucky Me, Nestle Ice Cream, Globe, and HavItAll commercials airing on TV.

There was a time when almost every commercial spot had the face of Pambansang Kamao on it—there’s San Miguel, McDonald’s, Datu Puti, Alaxan, and Darlington Socks, Magnolia Milk, Magnolia Ice cream and Milk, Smart, Nike, and even Extreme Magic Sing.

And in every fight, his shorts and head band would bear the logos of the big brands he endorses. Who wouldn’t want to be associated with a Pinoy boxing hero?

The scandal that rocked the marriage of the Kris to husband James Yap in February tested her capability to keep a hold on her endorsement deals. Bakeshop chain Goldilocks had just chosen the couple to endorse the said bakeshop when the controversy erupted. But a few months after, Kris pulled through.

“Anything that Kris Aquino touches turns to gold,” Cirio observed. “Her track record of endorsements in the previous years speaks for itself. And even a scandal that rocked her marriage did not deter companies from signing her up.”

When she mentioned on showbiz talk show The Buzz that she would be using Pampers for Baby James, the simple statement triggered an endorsement coup for the said diaper brand.

Cirio said, “The campaign we did for her with Pampers was about the love for her child. So, whether or not the rumors were true, it’s still about Kris and her son, Baby James.”

And the talk show queen shows no signs of letting up. Her family—husband James, Joshua and Baby James—are now part of the package. Her series of Bench print ads featured her and the men in her life.

She closed several multi-million-peso endorsement deals this year, and some people might be asking why?