Ruffa Gutierrez talks about being lucky in career, but unlucky in love 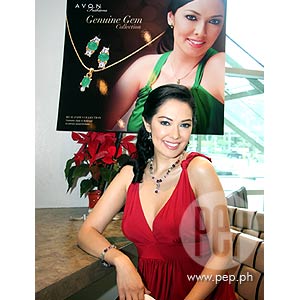 With all her beauty, why is she still loveless? Ruffa exclaims, "A lot of guys admire me but they don't text me or call me, they're all scared! Ewan ko, lahat sila takot sa akin. It's all the girls that always say, 'You're beautiful.' None of the guys do, which is okay lang... Ayoko munang ma-in love."


Ruffa Gutierrez was her usual bubbly self when she faced the press people in a media junket courtesy of Avon Fashions, her latest endorsement, at the M Café in Greenbelt, Makati, last November 27.

THE STYLE AMBASSADOR. The former Miss World Second Princess was chosen by Avon to be their Style Ambassador in the Philippines, just like Hollywood star Reese Witherspoon, who is the Avon Global Ambassador.

Sarah McIntosh, Avon's commercial marketing director for Southeast Asia Cluster, said that more than Ruffa's beauty, the actress was chosen because she also believes in Avon.

Sarah further explained, "I think it was a joint decision. I think we felt great about Ruffa and so many companies do. I think we love Ruffa, I believe many people do. But I think she loves us, as an organization, too."

Ruffa will also be endorsing Avon Fashions Jewelry and Accessories. In fact, during the press conference, Ruffa's long red dress went with a jewelry set from Avon's Genuine Gem Collection—from her earrings to her necklace to her bracelet. The said accessories were made of precious stones like amethyst, jade, and rose quartz.

When asked about the jewelry pieces she was wearing, "It attracts prosperity and love. I'm very excited to be wearing it. Prosperity, thank you, I know I'm very blessed now. Love, wala pa pero hopefully, when I wear it everyday, maa-attract ko rin ang love."

Is she looking for a new love? How's her love life?

She answered, "I'm not looking for love because I'm very well-loved by my friends and by you, guys. But with affairs of the heart, no. I guess when you're unlucky in love, you're blessed with your career. And right now, hindi ko puwedeng ipagsabay yung dalawa so I would rather be blessed in my career because I have two little girls that I need to support."

The celebrity talk show host reiterated that she's not yet ready to fall in love again. She explained, "I don't see myself, actually even entertaining anyone right now. Kasi, unang-una, wala akong time para sa kanila. Pangalawa, it'll be unfair also kasi hindi pa talaga nako-close yung past relationship ko. It's still very complicated so I don't wanna entertain anything right now. But who knows what 2008 will bring."

INDEPENDENT WOMAN. With a number of endorsements that have come her way, a reporter hinted about her multi-million net worth.

Ruffa immediately replied, "Actually, no, because I have to pay for the kids' school. School is so expensive now."

She was then questioned why she's not asking financial support from Yilmaz. Ruffa said, on a positive note, "Well, actually, I'm very happy that I can support my kids on my own. And I'm an independent woman so I don't need to ask anybody for money because I can afford to work on my own."

The actress-endorser then talked more about teaching financial independence to her daughters, Lorin and Venice. "That, I think, is what's important to teach young women out there. You know, even if you're already born with a silver spoon. I think it's really important that you focus on your work and try hard to succeed."

Ruffa said she wants her daughters to know the value of money. "Not because may kaya ang tatay nila, ang mommy nila, you know, I also want them growing up to know the value of work. That's what my mom and dad taught us, na kahit you're born with a silver spoon or you were able to study in private schools, I think, they should also know what it's like to work hard, to make your own money, to save, and to invest."

For her parting shot, she left an advice for the single moms who raise their children. "Always don't think that your future is in your hand, you know. Always think that you have to save for the rainy days. So aside from saving, aside from being responsible as a mom, I think it's also important to teach by example, yun ang advice ko sa kanila."