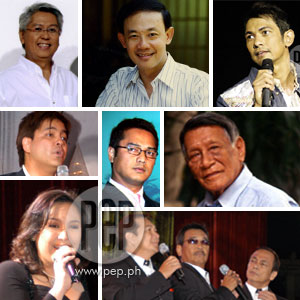 Sometimes we may not feel the Christmas spirit because of our worries, but the Christmas carols are there to bolster our spirits, sing us to sleep, and make our Christmas complete. Thanks to the singers and composers who brought these songs to life!

We know Christmas Day is fast approaching once we start hearing the Christmas carols! Everywhere we go—in shopping malls and supermarkets, on the streets, at home—we hear the tunes that instantly remind us, "It's His birthday!"

Christmas carols are traditionally sung during the month of December and ends just before Christmas Day. Yuletide carols originated way back in the 13th century in Europe when they were intended as communal songs, not only for Christmas but during days of harvest as well. It was in the 19th century that Christmas carols like “The First Noel” and “Hark the Herald Angels Sing” were set in print, particularly in William B. Sandys’s Christmas Carols Ancient and Modern (1833).

Karoling here in the Philippines serves purposes aside from bringing cheer. For kids, it's a fun way to ask for pamasko, gifts in cash. They visit every home in their neighborhood and sing a medley of Christmas carols. The singing usually ends with, “We Wish You a Merry Christmas (3x), and a happy New Year!” And then, in unison: “Namamasko po!”

If the carolers are successful in getting spare change, their finale goes, "Thank you, thank you, ang babait ninyo. Thank you!"

When ignored, they sing: “Thank you, thank you, ang babarat ninyo, thank you!”

For adults, like neighborhood groups and civic organizations, caroling is a way to raise funds for this or that cause. It's all in the spirit of fun.

PEP brings you its top list of OPM Christmas songs. Our simple reason for choosing them? They are a vital part of the Season's tradition as they pluck our heartstrings with cheer and love.

Don't we all feel giddy and happy every time we hear it?

This Levi Celerio composition has been part of children's karoling repertoire for so many years now. It has been a household song for over 50 years. The lyrics and tune are so easy to memorize, so it has been easily passed on from one generation to the next. It's a song of joy, and it speaks so much about our Christmas traditions.

Levi Celerio's song described our excitement in welcoming the Christmas season. Along with "Ang Pasko ay Sumapit," recording companies had produced several versions and included them in Christmas medley albums. This is also an all-time favorite for its message of love.

When this song started airing on the radio, it instantly became the song of madlang people. We bet our parents and nephews and nieces could sing its chorus with feeling: "Let's sing Merry Christmas and a Happy Holidays/ This season may we never forget the love we have for Jesus/ Let him be the one to guide us as another new year starts/ and may the spirit of Christmas be always in our hearts."

This was composed by Jose Mari Chan and he sang it with his daughter Lisa Chan. The melody reminds us of the Christmas's gentle breeze, and the voices are warm and soothing. The message is positive and so full of hope, and it's a timeless reminder that although we are hounded by everyday problems, the spirit of love and giving should prevail in our hearts.

It appeal chooses no age, no place, and no time. As proof, it's the best-selling Pinoy Christmas album of all time.

Originally sung by Gary Valenciano, penned by Aureo Estanislao, and arranged by Francis Dandan—this became the official hymn of the homesick, especially the OFWs (Overseas Filipino Workers) missing their loved ones and vice versa.

"Pasko na, Sinta ko," has been the country's unofficial Christmas love song through the years. It has sad lyrics and melody, but it signifies how Pinoys value love and family, how we all hope to get reunited with our loved ones during Christmas.

It sounds pop! But it is played only during Christmas.

Before "Pasko na, Sinta Ko" and "Sana Ngayong Pasko" were released, this Martin Nievera hit was the reigning king of Pinoy Christmas love songs. While most Christmas songs in the '80s talked about the joys of the holidays, "Christmas Won't Be the Same Without You" was about heartbreak.

Pinoys are indeed romantics at heart...even during Christmas time!

With its clear imagery, one can not help but feel the intensity of how we treat Christmas: it's like a never-ending festivity. We put up our Christmas lights and tree as early as September, and remove them as late as February. We find time and money to decorate our homes, regardless of the size, with bright parols and lanterns. Indeed, the kutitap of this season can make us forget our worries.

When Sharon Cuneta released this single, she said it's for the MAP (Malamig ang Pasko) Club members—the loveless, heartbroken, and lonely.

Pinoys do make a big deal out of spending Christmas alone. Why? Maybe, its in the chilling air or the glittering lights. Or maybe because we put so much value into this season that we want to celebrate it with our special someone. After all, Christmas is about love... giving and sharing it.

This was the most popular soundtrack in APO Hiking Society's PASKOnAPO album. Pinoys instantly felt an emotional connection with the song.

"Himig ng Pasko" tells so much about our Christmas traditions, and how the songs and carols spice up our celebration!

Composed by APO Hiking Society, "Tuloy na tuloy pa rin ang Pasko" is socially relevant. Between the lines, it's about hard times and our daily struggles.

In short, with or without money, the celebration must go on!

And we're leaving our 10th spot for your own pick. The space below is all yours.