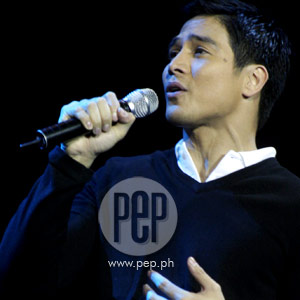 He's got a successful career, looks and body to die for, a loving family, except that his lovelife is still zero. One of showbiz's most eligible bachelors says, "I want to be complete."

All roads led to the Araneta Coliseum in Cubao, Quezon City, last Thursday, November 30, for the celebration of Piolo Pascual’s 10 fruitful, exciting years in showbiz.

The concert, TEN, was a night of reminiscing and cheering for the showbiz heartthrob’s successes in showbiz. A video presentation narrated the Top Ten highlights of his career—his past TV series with ABS-CBN, movies with Star Cinema, best-selling songs, the people he worked with, and the awards he received.

Piolo opened his concert with an upbeat rendition of Wency Cornejo’s Mangarap Ka and Kitchie Nadal’s Bulong. The simple stage design and his wardrobe matched the Ultimate Dreamboy’s “down-to-earth” personality.

SPECIAL GUESTS. The show gathered most of Star Magic’s roster of talents for a dance extravaganza. A member of the press commented, “It’s like watching a grand production of ASAP minus the main hosts.”

After a few solo numbers, Piolo introduced his next guest as “My idol, my favorite singer, my mentor—Mr. Ogie Alcasid.” (It was the songwriter who produced Piolo’s two multi-platinum albums.) The two singers rendered a medley of “Kung Mawawala Ka” and “Kailangan Kita.” It was one of the most applauded parts of the concert. Afterwards, Ogie did the reggae version of “Nandito Ako.”

Piolo also shared the stage with Asia’s Songbird Regine Velasquez. Together they gave a soulful rendition of the theme song of their movie Paano Kita Iibigin. And then, Regine sang her current hit “Love Me Again,” which had the crowd gaping in awe.

Judy Ann Santos, one of Piolo's perennial screen partners before, was not present. He dedicated the song "Till There Was You," also the title of one of their movies, to director Joyce Bernal instead. After the song, Piolo jokingly called the director, “Juday,” adding, “Ikaw ba ‘yan?”

The concert’s finale had Piolo, and the entire Big Dome, singing and dancing to Pinoy dance hits, such as “Rock Baby Rock,” “Annie Batungbakal,” “Bongga Ka Day,” among others.

The concert, directed by Louie Ocampo, was a blast. The repertoire and Piolo’s performance sent the fans screaming “I love you, Piolooooooo!” most of the time. Regine Velasquez remarked, “Ang galing kumanta ni Piolo, ano! Grabe!”