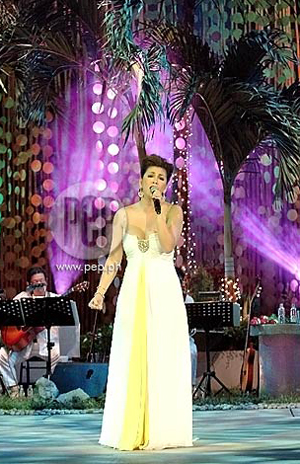 
Regine Velasquez recently paid tribute to OPM (Original Pilipino Music) artists to remind Filipinos that we have much to be proud of when it comes to our musical heritage. Even the stage was transformed into a lush tropical garden and made to look like a scaled version of Luneta Park—with real grass and trees. The organizers donated the trees to the Star City complex when the show ended.

Regine wanted to accommodate as many OPM songs as she could during the event, which is why each performance (November 9, 10, 16, 17, 23 and 24) boasted a different repertoire. Many of her choices were the timeless compositions of George Canseco, Ryan Cayabyab, Rey Valera, Basil Valdez, and Willy Cruz.


Spotted by PEP (Philippine Entertainment Portal) during the November 24 show were GMA-7's senior vice-president for entertainment TV Wilma Galvante, Dr. Vicki Belo and her beau Dr. Hayden Kho Jr. Ogie Alcasid was there nearly every night except for the last performance because he had his own show that Saturday night.

It was a highly successful concert, to go by the last day. In the November 24 performance, Regine incorporated a couple of songs from the other weekend events—a fitting finale for the concert series.

The last day was also videotaped for television under the direction of Louie Ignacio. The TV special was aired last Sunday night (December 2) on the Kapuso Network.

PEP's editor-in-chief Jo-Ann Maglipon said, "It was a very emotional show, which is what I think made it very successful." She also noted the two things that contributed to the show's triumph:

"Because it was OPM, it resounded among the audience. When she performed Yoyoy Villame's 'Butchikik,' the crowd became really involved. May involvement talaga. When she goes very emotional for the romantic songs, there would be a real hush among the audience. Although people liked it whenever she belted, I particularly like the quiet moments within a song or for a song. She was so good—her tonal quality and the clarity of the words were all intact.


"Secondly, Regine really made the show worth the money of the audience. No one in his or her right mind would have gone home dissatisfied. The Aliw Theater, which has a capacity of 3,000 people, was jampacked.


"But the crowd showed their disapproval by shouting words of encouragement for the singer.


"The last performance of Ang Ating Musika was very moving. Regine has a way of speaking, especially in Tagalog that it touches the core. It is very emotional for a Pinoy to listen to her."


Asia's Songbird had three gown changes. We would have wanted more because Regine is known for having fabulous gowns but at least she was able to sing almost continuously through the program. In fact, the singer hardly left the stage that night.

The most applauded portion (among the joint performances) would be the one with the alumnae of Pinoy Pop Superstar, the reality singing competition that Regine hosted for its past three seasons. Now part of the GMA Artist Center, these very promising singers are Jonalyn Viray (Year 1 winner), Aicelle Santos (1st Runner-up Year 2), Maricris Garcia (Year 3 winner) and April delos Santos (Year 3 winner).

Regine confided to PEP (Philippine Entertainment Portal), that this portion is always one of the most applauded.

Jo-Ann said, "You can recognize that these PPS singers have raw and pure talent. It's not hype, it's not media powered, it's not a manager's pull."

She added, "Martin Nievera still sings very well but he has to improve his spiels and veer them away from Pops Fernandez and from all the innuendos about the female form.

Overall, Regine's endeavor to revive Original Pilipino Music is very much appreciated and should be applauded as a noble effort to rekindle interest in our rich musical heritage."