After PBB stint, life rolls on for Mcoy Fundales 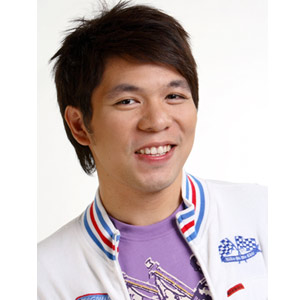 Stationed at the right wing of the stage while waiting for the event to officially start, Mcoy confirmed good-naturedly, "One week na 'ko sa labas. One week na 'kong laya."

Mcoy, along with comedienne Ethel Booba, opted to exit voluntarily from the PBB house, consequently forfeiting their chance to bag the top prize as well.

DAYS SEEMED ENDLESS. According to Mcoy, the first few days inside the house were exciting. But the euphoria soon wore thin as hours and minutes dragged on.

"Well, it gets lonely inside," he admitted, recalling his incarceration along with other celebrities. "Kasi walang ibang ginagawa kung hindi task and less conversations with the other housemates. Hindi ako sanay ng gano'n, e, and nami-miss ko pa yong family ko."

He used the word "lutang" in describing the general mood upon stepping outside the celebrated house.

"Kasi we've been cut off from the outside world," Mcoy explained. "We had no idea kung anong nangyayari like the bombings and all those things. So I tried to update myself after I went out."

MAKING PEACE WITH KUYA. Many believed that Mcoy's disenchantment inside the house intensified when kuya made a comment pertaining to plagiarism. The criticism unknowingly opened an old emotional wound in Mcoy, who admitted still being haunted by accusations of ripping off an existing melody and incorporating it to an Orange & Lemons song two years ago.

"Okay na kami," clarified Mcoy about his relationship with kuya. "He apologized the next day and I admire him for that gesture and I accepted it and in a way I told him din na pasensya na rin. Siguro hanggang gano'n lang talaga 'yong story ko sa loob ng bahay."

Leaving Pinoy Big Brother means facing the real world once more. And reality for Mcoy means picking up the guitar and knocking off tunes anew.

"Balik po sa mundo ko, musika. I'll be having a new band after Orange & Lemons. We're working on it, so may mga options pa kami, so we'd rather not announce muna kung ano yong mga options hanggang hindi pa sure," he politely begged off.

As far as his relationship with the other members of O n' L, Mcoy revealed that he's still working with former bandmates, bassist JM Del Mundo and drummer Ace Del Mundo.

But when it comes to another former member and creative collaborator, Clem, things continue to be on a standstill.

"When I went inside the [PBB] house wala. Wala and hanggang ngayon hindi pa kami nagkikita," he mentioned when probed if they've been communicating following the group's demise.