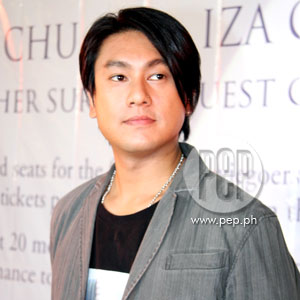 
Filipino fans of Taiwanese pop superstar Ken Zhu of F4 got the opportunity to meet him up close as he and Batanes co-star Iza Calzado shared the limelight at Showbiz Central yesterday, December 2.

Although Ken was not feeling well, the quiet and laidback singer-actor still made a good impression on Showbiz Central'sstudio audience and hosts. As Ken and Iza entered the stage, the crowd went wild and ear-dropping squeals filled the whole studio. SC co-host Raymond Gutierrez exclaimed, "I have never seen the audience go this wild here on Showbiz Central!"

Ken, who looked surprised at the crowd's reaction, greeted the screaming fans with a polite "Hello." But he also politely motioned the fans to keep quiet when the interview started.

KEN LOVES KAMOTE. Ken revealed that he first visited the Philippines when he was just seven years old. He returned many years later, when F4 visited the country at the height of the Meteor Garden mania.

Pia Guanio asked Ken what he loves most about the Philippines.

"About loving the food in the Philippines, what particular type of food did you fall in love with?" a curious Pia asked.

"Uh, I think the kamote. Because while we were doing the project, the camera crew was cooking their own food and I join them every day for kamote," Ken narrated.

How about the province of Batanes, did he love it as well?

"Yes, I love that place," he replied. "The place was really beautiful. It's like paradise. I think the Philippines is a very promising site for development and stuff, so I'm looking on a long term thing of investing and development."

BATANES, THE MOVIE. Since the interview now focused on Batanes, Raymond asked, "Now you guys have great chemistry in Batanes. How was it working with Iza Calzado in the film for three weeks?"

"Three weeks?" a puzzled Ken asked. "Oh, we actually only worked for about two weeks. It was fun, it was really fun. Every day was really fun because she is a very nice person and we got along very easily."

Iza answered, "I think it was during the presscon, I was telling the press people that I told him [Ken] that I'm sorry because I thought before... You know, I was really not part of the whole Meteor Garden fanatics. But when I heard him singing in the set, I was very much impressed and I had to tell him that he was such a great singer."

Upon hearing this, the SC hosts requested Ken if he could sing a few lines. Unfortunately, he politely refused saying that he wasn't feeling well because of a cold.

A mix of "Awww!" and "Sayang!" echoed around the studio as the fans missed out on an extra treat. However, Pia had a juicy question for Iza and Ken: "Were you guys uncomfortable with your kissing scene with each other?"

Before Ken could speak, Iza jokingly interrupted, "No, not at all. I don't think so."

LUCKY FAN. Rose, a devout F4 fan, was given the opportunity to ask and kiss her favorite star. The starstruck fan fumbled as she took out a paper containing questions; she looked as if she still couldn't believe that Ken himself would answer.

Rose got herself together and asked, "We have learned that you will have new film together with other F4 members. When is the release of this film?"

"We're actually doing a drama series for the Taiwanese tourism board right now. So, it's gonna be finished probably by the end of this year," Ken replied.

"How about music releases?" Raymond followed up.

Pia now suggested that it was time for Rose to hug Ken to complete the fan's wish of total F4 bliss for five seconds. As John translated to Ken that Rose was about to hug him, he gamely gave the go signal.

"Sure!" said Ken, as the lucky Rose hugged and jumped and kissed him all at the same time.

When Rose got her fill, she excitedly said her thanks. The ever-gentlemanly Ken replied, "You're welcome."

Sweet, who earlier told everyone that he was going to attempt to get a kiss from Ken, quipped, "Ken, I'm your number one fan, too. Can I kiss you?"