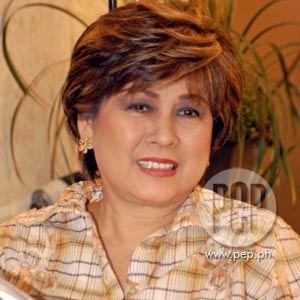 For all her reputation as one feisty superwoman, Annabelle Rama regards her two granddaughters, Lorin and Venice Bektas, as her kryptonite, or simply, her veritable soft spot.

Christmas is Baby Jesus's birthday—and a celebration for children, naturally. It's the season for kids to expect aguinaldo from their ninongs and ninangs, and to receive gifts as well from parents and other elders. And who but grandparents come closest to being their Wise Magi or Santa Claus? In fact, Christmas is for kids from nine to ninety!

Lolos and lolas are "Grand" not simply because they hand out those crisp money bills during Christmas. As parents twice over, they hold a wealth of life experiences and knowledge that's a source of strength for the family. They've long overcome the pressures of young parenthood and so can afford to spoil their apos.

Especially doting grandmothers (Christmas time or not) who are showbiz celebrities. PEP (Philippine Entertainment Portal) lists three high-profile grandmas and one celeb who's a lola-in-waiting. Let's see how they shine in their real-life role as parents for all seasons.

ANNABELLE RAMA. "I am both soft and strict as a mother," said Annabelle Rama to writer Ricky Gallardo in a published interview last February 18, 2007. After her share of the spotlight as a sexy star in the 1970s, and now a talent manager for several stars, Annabelle is known to be a feisty stage mom, especially to her own daughter, actress-beauty queen Ruffa Gutierrez.

For all her devil-may-care attitude, close friends describe Annabelle as a devoted wife and mother to her six children and now, to her granddaughters, Lorin and Venice Bektas.

If she's vulnerable when it comes to her apos, not so during the height of Ruffa's controversial split with her husband from Istanbul, Yilmaz Bektas.

Annabelle never hesitated to voice out her disdain against her estranged son-in-law. In the face of a possible reconciliation, Annabelle publicly begged Ruffa to use her head before making a decision. Annabelle's objection to Yilmaz, however, is tempered by her love for his children, Lorin and Venice.

Annabelle has assumed a more active role in the lives of Lorin and Venice. They were seen together at the recent Artists Fair Pilipinas bazaar at the Eastwood Center in Libis, Quezon City.

LANI MERCADO. If she had her way, actress Lani Mercado would rather see her son Jolo Revilla move on with his life without the burden of fatherhood on his young shoulders.

Said Lani in an interview with a national daily, "If only I was able to advise Jolo not to indulge in premarital sex. Hindi pa kasi sila established sa career nila and they have not prepared for their future yet. Now, they have a baby whose future thay'll have to secure."

She was referring to Jolo's brush with fatherhood at the tender age of 17 when he got Rosanna Roces's then 16-year-old daughter Grace Adriano pregnant.

It is a sentiment expected from a mother who wants nothing but the best for her son. But that doesn't mean that she treats her grandson, Jose Gabriel Bautista, as a mistake.

"Excited!" Lani enthused enthusiastically when asked on how it feels to be showbiz's youngest grandma.

It wasn't an easy ride right at first. Due to the sensitivity of the situation, not to mention the young ages of both Jolo and Grace, the families of both parties went through a lot of dispute, including a DNA test to determine whether the child was really Jolo's.

The test result eventually confirmed, 99.7 percent, that the young Revilla was indeed the father of Jose Gabriel.

Everything is water under the bridge now and both the Revilla family and Osang are helping to raise their grandson as best they can.

Jolo cannot yet assume all his fatherly obligations, given his limited resources. Lani and husband Bong Revilla stepped in like any other lolo and lola under such circumstances.

Ideally, Lani said, "I think it's the responsibility of my son to take care of his son. But since he's not capable of doing so, just yet. For a while, it was him who was giving. But when his savings were depleted, kami na. It's our obligation already to help him."

ROSANNA ROCES. When Rosanna Roces's daughter, Grace Adriano, got pregnant at the tender age of 16, the consequences went beyond the issue of determining who the father is and the future of the child. The unexpected pregnancy also caused the breakdown of Rosanna's friendship with Dr. Vicki Belo and talent manager Lolit Solis.

Rosanna accused Dr. Belo and Lolit of spreading the rumor about Grace's condition. At the time, the public and the media were still oblivious of the pregnancy involving Grace and Jolo Revilla. The rift led Vicki and Osang to a court battle, which was dismissed in favor of the latter earlier this year.

Budoy lives with his mother and lola, a setup whole-heartedly accepted by the Revillas. The coming of Budoy couldn't have been more apt at this stage in Osang's life. Her devotion to her grandson is also serving as her payback for all her motherly absences in the past.

Despite gaining a few pounds, Ms. D would definitely live up to the "cutest granny" title she hoped to achieve come next year. But vanity-for-laughs aside, Dina is excited while at the same time wary of her daughter Danica Sotto's delicate condition.

Everyone knows of course that Dina and Vic didn't stay together as a couple due to personal differences. Now that Danica has a family of her own, Dina is sharing her life's lessons to her daughter to make sure that her marriage with cager Marc Pingris would be on solid ground.

"... Yung pinagdaanan kong hindi maganda, ayokong pagdaanan niya. So, parang she asks you how to cook, how to take care of herself. Ano ba'ng mga na-discover mong mali sa pag-aasawa, mga stuff like that," shared Dina to the press.