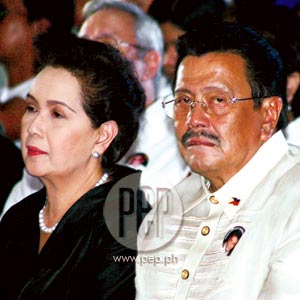 Former president Joseph Estrada could not hide his tears at the wake of his bosom buddy, Fernando Poe Jr. Under house arrest at the time on plunder charges, Estrada made every effort to attend the wake but was not allowed by the Sandiganbayan to attend the funeral march. Seated beside him is FPJ"s widow Susan Roces.

On the evening of December 11, 2004, Fernando Poe Jr. suddenly felt dizzy at a gathering inside the premises of his film studio in Quezon City. He was rushed to the St. Luke's Medical Center, immediately placed in the intensive care unit (ICU), but shortly later suffered a stroke while he was being treated for brain clot. He slipped into a coma. The prognosis was not good.

He was brought to Arlington Funeral Homes in Pasig City on the same day. His widow Susan Roces hoped to have private time at the funeral home but hundreds of people had already lined up to pay their respects.

Past midnight of December 15, FPJ was transferred to St. Domingo Church in Quezon City. People followed in droves. Within two hours, police estimated at least 5,000 people had come to see the King of Philippine Cinema for the last time.

All walks of life. Friends from showbiz and politics came to the wake. For those in the entertainment world, FPJ was Da King they respected. Those in politics were those he met when he ran and narrowly lost, under vehement protest, in the 2004 elections to Gloria Macapagal-Arroyo.

Fans came from as far as Ilocos in the north and from down south in Mindoro. A stampede even occurred as fans of the movie icon climbed and attempted to open the gates of the church just to get in.

When things got in control, many of the fans lined for hours just to catch a glimpse of the coffin of the once virile and magnetic actor. Some of them broke down in front of Susan Roces, who comforted them.

Some showbiz friends couldn't be there at the church though. Sharon Cuneta was at Arlington when FPJ was being suited up but she was never seen in Sto. Domingo Church because her husband, Senator Kiko Pangilinan, would have been booed by FPJ loyalists. The senator was seen by FPJ supporters as the person who railroaded the the presidential victory of Gloria Arroyo in May 2004.

Kris Aquino also stayed away. She campaigned for Arroyo's presidential campaign even if she promised before to campaign for FPJ.

Vilma Santos, then Lipa, Batangas mayor, went by her lonesome. Her husband, Senator Ralph Recto, was very much identified with the administration party.

Former President Joseph Estrada, a bosom friend of FPJ was given a day pass by the Sandiganbayan on December 21. He was able to attend the necrological service and allowed to stay until early morning of December 22 for the funeral mass. His arrival at the wake itself was an event covered frenzily by the media. Erap wept as he stood before his friend's coffin.

A toast to the King. Grief poured throughout the necrological service that started at 9pm. Considered as the last show of FPJ, friends and family spoke about the good deeds FPJ did in his lifetime.

She recalled that FPJ always thought of the common people like her. "Napakabait," she said, trying to hold back her tears.

To lighten the mood, the King of Comedy Dolphy jokingly said, "Tingnan ninyo siya, napaka-guwapo, nababakla ako." He also recalled that FPJ was there for him in his time of need.

"When we were crucified by the media, he was always there to offer his friendship," Dolphy said in Tagalog, possibly referring to the time he and live-in partner ZsaZsa Padilla were condemned because of their relationship.

Joseph Estrada for his part shared that it was the FPJ who gave "Erap" as his nickname. FPJ was also the first to call Dolphy "Pidol" and he called his wife Susan "Swanie."

Susan Roces vowed to continue her husband's legacy of helping the less fortunate, not only those in the movie industry but also the public.

Final Goodbye. The funeral march began before sunrise. Police estimated the crowd at 300,000 but FPJ followers claimed there were at least three million people.

Many of the marchers carried streamers and banners showing where they came from, like Pangasinan, Cavite, Batangas, Mindoro. The horse-drawn carriage which pulled the casket of Fernando Poe Jr. seemed to energize the mammoth crowd that had gathered.

Susan and daughter Mary Grace rode in a van. Supporters and friends rode in a long procession of vehicles.

The march was delayed to a crawl several times as big crowds had lined up along the route.

The hearse arrived at around 8:45 a.m. A slight commotion delayed it from making its way to the Poe mausoleum as some supporters tried to force their way through.

It was a five-hour march from Sto. Domingo Church to the Manila North Cemetery in La Loma, Quezon City.

FPJ was laid beside his father, Fernando Poe Sr. and his mother, Bessie Kelley. On his tomb was placed a photo of his famous face and the simple words: Da King 1939-2004.

With additional reports from YES! magazine